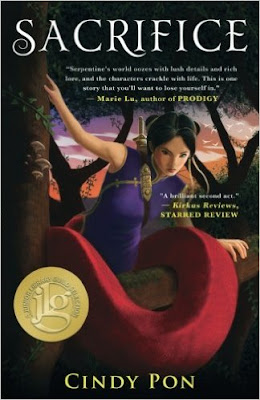 Synopsis: Sacrifice is the sequel to Serpentine (reviewed here), and follows the continuing quest of Skybright to save her world and the people she loves from encroaching demons. By the end of the first book (minor spoilers ahead, so you might want to stop here if you haven't read Serpentine yet) Skybright has accepted the fact that she will never have a normal life: as a half-demon, she can shape-shift at will to a serpent with human head, arms and torso, and she has preternatural abilities that humans lack.

At the same time that she came into her own as a half-demon (helped along by the powerful, magical, and brutally handsome Stone), she also came to realize how very human she was in other ways—the important ways, such as her friendship for her former mistress Zhen Ni and her love for the young monk Kai Sen. Skybright loves them so much, and her world, that she makes a profound sacrifice at the end of Book 1: she gives herself up to the underworld in Zhen Ni's place in order to close the breach that is leaking demons into the kingdom of Xia.

Now, Skybright, Kai Sen, and Stone have realized that, even after Skybright's courageous act, demons are still somehow leaking into the world, in defiance of the ages-old agreement between the monks and the immortal world. As punishment, Stone is stripped of some of his powers, making him much more human and more knowable; but at the same time that Stone is growing closer to Skybright, Kai Sen is drifting apart from her on his own path as the head abbott at the monastery. And Zhen Ni becomes completely inaccessible after she is married off to the mysterious Master Bei, who has secrets of his own. Tracking down the source of the new breach into the Underworld brings Stone and Skybright along a converging path with Kai Sen, but can they find the breach in time to save everyone? And what in the world has happened to Zhen Ni?

Observations: This is another fun foray into the intriguing world of the kingdom of Xia, with its vivid mythology and Asian-inspired fantasy feel. Tanita and I both agree that the end of Book 1 left us wanting more, and I was lucky in terms of timing, since I read Serpentine last month and only had a few weeks to wait for this one. What I really liked about both books was seeing Skybright's transformation and experiencing from her perspective the incredible inner and outer changes of her demonic half. Where the first book left me wondering what more was to come, the second book satisfyingly continued to follow her inner journey toward self-acceptance and strength.

The metaphor is clear here, applied to those of us who are fully mortal: we all have parts of ourselves that we have trouble accepting, that we might want to reject or ignore, but in order to be fully ourselves and whole, we need to know those aspects and realize they are part of us too. By seeing ourselves as we are, clearly and honestly, we can learn to grow and change.

Conclusion: This was an action-packed sequel that also didn't skimp on the interpersonal tension between characters—the strong portrayal of love and friendship gives the story its emotional heart. Cindy Pon's Asian-flavored fantasy world will also appeal to those looking for more diversely inspired stories.

I purchased my copy of this book courtesy of Amazon. You can find SACRIFICE by Cindy Pon at an online e-tailer, or at a real life, independent bookstore near you!
Posted by Sarah Stevenson at 8:00 AM
Labels: AF, Diversity, Fantasy/Sci-Fi, Multicultural Fiction, Reviews