Turning Pages Reads: AND I DARKEN, by KIERSTEN WHITE

Readers who enjoy a sprawling fantasy epic will be glad to see another female-centric contender on the horizon. Though The Conqueror's Saga is a series, its first book stands alone with a finished arc including beginning, middle, and end, leaving the reader the choice to continue or consider the epic over and done. Like most political-kingdom-conquest fantasy books, there is the violence of war and personal violence, though violence against women is minimal.

Synopsis: Ladislav Dragwlya's name is even the feminized version of her father Vlad's, and Dragwlya means "daughter of the dragon." Everything about her is in his imprint, in his name, and he is the sun in her universe -- not because she has warm and loving feelings toward him, but because she has already learned what it is to be nothing, and only in his eyes, in the brief benediction of his smile, does she feel she has any worth.

It's clear what Vlad values - power - his own. Weakness and softness are reserved for things like women, who are worthless. Lada - who refuses to answer to any name but that - despises these things too, from babyhood, even though this means she despises her younger brother, who is beautiful, with big, round, innocent eyes, and no capacity of viciousness or suffering. Radu is a pawn, as surely as Lada is, in their father's kingdom, but he looks like it - and is bullied, tormented, and beaten because of it. Wallachia is for the strong, Lada gathers from this. No one expects a vicious backhand or a knife in the dark from a princess. Which suits our antihero Lada to the ground, because she is all those things: the knife in the dark, the headbutt that breaks the nose, the spit in the eye, the graceless, masculine princess. She is determined to be Someone, not a girl. Not useless. Not soft. Not used to solidify another's power. She endeavors to express this to Radu - bloodying him in her attempts - but he simply cannot learn to toughen up. At a loss, she reluctantly decides to protect him. After all, he is hers - and what she has, she keeps.

"If anyone is going to kill you, it will be me. Understand?"
Her brother nodded, snuggling into her shoulder. "Will you protect me?"
"Until the day I kill you."

Clearly, they have the dynamics of sibling relationships worked out. 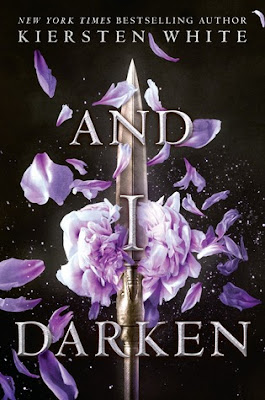 While beautiful - and useless and terrified - Radu exudes privilege just by existing, Lada is all frustrated ambition, since being used is all that's left to the daughter of a price of Wallachia. Lada and Radu are traded to the Ottoman Empire to secure Wallachia's good behavior. The sultan and his advisors torment them, until the Sultan's son Mehmed, for whom the Sultan cares nothing in particular, takes them away to his home. Mehmed, like them, is just a tween -- weak - the son of a low-level concubine - but he is kept in comfort above anything Lada and Radu have ever experienced. He saved them, and Radu adores him unreservedly, longing with his whole heart for a real friend, someone who isn't prickly and apt to leave him bruised like his sister. Even Lada almost likes him, although she doesn't trust this soft spot where they have landed. She trains hard with the Janissaries serving Mehmed and tries to keep from realizing that she is hurtling toward womanhood at horrifying speed. There is nothing for girls in this world but to be married off as pawns -- and so Lada has determined to never marry, become a soldier, and return to her lands - somehow. Some way. Radu, meanwhile, has found solace in faith in the Ottoman Empire, and while his sister longs for the freedom of Wallachia, Radu believes that he is home.

Abruptly, the idyll ends and Mehmed is called into office. His other brothers and their heirs have mysteriously died. His father is retiring his sultanship, and Mehmed is suddenly in line to getting everything he's ever wanted... but he's still only twelve. Lada believes that if he simply acts, he can manipulate his father into coming back. Mehmed's mother believes she can manipulate events herself. Radu simply wants to love, and be loved, but political ambition -- his sister's burning quest to have some use other than being ornamental, and Mehmed's confused desire for both power and approval -- simply roll in and drown him in the tide. Before any final choices can be made, the Empire is out of their control, and the three must entrust their lives to each other. Betrayal, jealousy, lies, and mistakes stand between Lada and her dream of returning home, between Radu and his desire for love, and between Mehmed and his throne. In the end, only one of them truly receives what they've needed, and none of them quite get what they want -- but all of them are players on the board of empires.

Observations: The first half of this book I enjoyed more than the last, as Lada acted as a true antihero. She was hateful, vicious, angry, and completely unconflicted with it. Conflict came in the form of emotional attachment, and a very painfully messy love triangle. I'm always astounded when novels depict non-traditional girls as being tomboys so obviously not knowing anything about their own emotional state, feelings and desires. I was disappointed that the conflict was so cheap - this brilliant triumvirate fell apart over lust for a character whose characterization and motivations weren't strong enough for me to feel that the affection was organic. Despite the varying messages about a woman's power throughout the novel, it is only when Lada began to lie to herself that I despaired for the plot. However, things right themselves after not too many false starts. The twanging narrative tension will be someone's catnip, though not entirely to my taste.

This novel is violent, rife with soldiers, assassins and the like, and while the author is careful to keep the inherent violence of a militia against unescorted women to a minimum, there is some - be aware of this. The marketing compares this novel to the George R.R. Martin Game of Thrones series; I have neither read nor viewed that unfinished mass of epic-ness, so couldn't say, but I do know that there the level of political machinations are about on par with other novels about empire, so there's that.

Conclusion: At 498 pages, this is a thick, weekend doorstop of a novel to enjoy tucked up in bed. AND I DARKEN will suit readers in search of a "strong female character" down to the ground, and may perhaps change how we think of strength, and what we imagine we know of sacrifice.


I received my copy of this book courtesy of the publisher and am quoting from an advanced reader copy. After July 7, or June 28 in the UK, you can find AND I DARKEN by Kiersten White at an online e-tailer, or at a real life, independent bookstore near you!