Monday Review: THE VANISHING THRONE by Elizabeth May 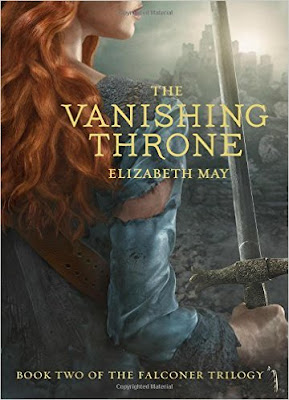 Synopsis: The first book in this trilogy, The Falconer (reviewed here), was one of those surprise reads for me—as a combination of historical fantasy, faeries, and a dash of steampunk and romance, I wasn't sure I would like it. I've read a lot of urban fantasy books over the years about faeries and I reached a saturation point a while back. But the unexpected setting of Victorian Scotland, surprising characters, and a healthy dose of action meant I enjoyed it much more than I expected to.

The Vanishing Throne is the sequel and Book 2 of the trilogy, and it continues where the first book left off. The malevolent fae named Lonnrach has narrator Aileana in his clutches, her Falconer fae-hunting powers neutralized and her body and soul under his control in the faerie realm. Rescued from this dark, harrowing, and gruesome torture, Aileana returns to her home of Edinburgh only to find that a horrible future has come to pass and everything she knows and remembers has been destroyed. She must ultimately team up with the few remaining humans and her fey allies in order to prevent Lonnrach from acquiring even more power and destroying what remains of her world.

Observations: As in Book 1, Aileana is an engaging, relatable, and empowering character. She makes a great heroine: she can wield a sword like a master, she creates nifty mechanical inventions, and, of course, she has a Dark Side. This is a very classically structured tale in that way. Aileana also comes with intriguing sidekicks: her training master Kiaran, a faery himself, with a vendetta against his own kind (and we find out exactly why in this book). And, of course, the pixie Derrick, who somehow manages to be both the angel and the devil on her shoulder at the same time, and wields a mean sewing needle. Derrick's wisecracks provide moments of levity in a story that is otherwise quite dark, and will probably appeal to fans of Melissa Marr and those who like tales of dark faerie doings.

However, where some books about malevolent faeries focus on the mental and psychological horror, this trilogy so far is more about action and adventure, and I've enjoyed that. Aileana is daring and swashbuckling, and the action in this book is pretty much nonstop, from her escape from the faery realm to cheating death to defending the human outpost. And don't forget the romance—through it all, Aileana's feelings about Kiaran inevitably continue to grow. The more they grow, and the more she learns about his dark past, the more complicated things get…

The only minor quibble I had with this book was the language. Admittedly I don't think this is something readers will take issue with or even think about, because contemporary-ish language in historical fantasy is something you see all over the place. Derrick's wisecracking sounds undeniably modern to my ears, and I found myself wanting a little more here and there to make the characters sound…more Scottish, I guess. More Victorian. But it wasn't anything that brought me out of the story for more than a moment here or there.

Conclusion: This reminds me of other urban fantasy reads where the faery realm is subject to its own political machinations and is using humans as its pawns, like Infinity Concerto by Greg Bear, or the many wonderful books by Charles de Lint. Fans of Victorian-era historical fantasy with a steampunk twist, like the Stoker and Holmes books, might also enjoy this one.

I received my copy of this book courtesy of the publisher, Chronicle Books. You can find THE VANISHING THRONE by Elizabeth May at an online e-tailer, or at a real life, independent bookstore near you!

If you enjoyed this review, stay tuned for an upcoming guest post by the author!! Yay!
Posted by Sarah Stevenson at 11:15 AM
Labels: AF, Fantasy/Sci-Fi, Historical Fiction, Reviews, Steampunk