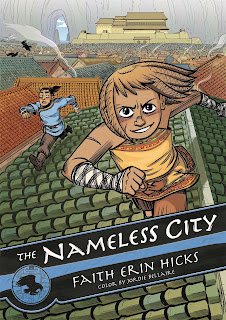 Synopsis: If you keep up with Finding Wonderland, you'll know I already have plenty of awe and amazement for graphic novelist Faith Erin Hicks. (See reviews here, here, and here, and interview here.) Her latest contribution—officially to be released on Tuesday—is The Nameless City, and reading it left me with even more admiration for her artistic and storytelling skills.

The setting is the City. To us readers, it looks a lot like someplace in China's early history: from the architecture to the armor, clothing, and hairstyles. The City has had many different names over the centuries, depending on which group of invaders has conquered it, for it controls a strategic pass through the mountains to the ocean. Through every wave of invasion, the City's native residents bow their heads, bend their backs, and forge on as best they can.

Currently, the City is controlled by a people known as the Dao, a people of great military prowess. Kaidu is the son of General Andren, and when we meet him at the beginning of the story, it's his first day at the palace, his first day of training to fight with the other Dao boys. He's come from living with his mother in the homelands and is plunged into the sights, sounds and smells of the City. While out and about, he meets a City native, an urchin named Rat. At first she resents him simply for being Dao. But Kaidu has grown up far from the City and its tension between residents and invaders, and he resists being pigeonholed. He's lonely, and he wants a friend.

Gradually they do become friends, and Kaidu begins to know the city as Rat knows it, running along the rooftops and scrounging for meals. It matters not at all to him that they are from two different worlds. Worry not, though—this isn't a depressing, Fox-and-the-Hound scenario. When the two of them find out about a plot that could put the palace and the City's rulers in danger, their loyalties are tested, their abilities are stretched to their limits, and their friendship is at the heart of it all. 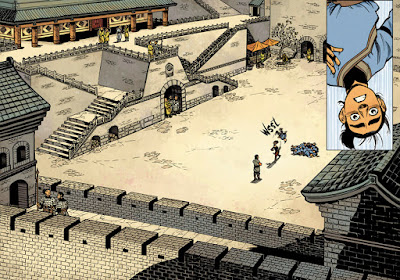 Observations: The visuals here, with astounding color by Jordie Bellaire, are lush and immersive. For me, everything about the graphic storytelling was awesome, from the characters (individual and expressive) to the amazingly detailed setting, to the artistic choices of the author in rendering scenes into series of panels. The quiet scenes were beautiful, and there were full-page panels I could have just gotten lost in, but there was plenty of action as well. Never, though, did I feel lost about what was going on in the story itself.

The way the author makes the City itself a palpable presence in the story—the City and its people, the Named—is an important and effective unifying theme. It also is a tidy way of emphasizing other elements that further deepen the story: sociopolitical themes like self-rule vs. outside conquest, as well as interpersonal themes like who is inside and who is the outsider, and what it means to be friends across a social divide, and what to do when you have competing loyalties: family, friends, nation. It is the kind of book that rewards thinking about it and re-reading it, because it is deceptively simple and yet multilayered. The characters become a central focus around which these larger themes revolve and are brought to vivid life.

Conclusion: I'm going to be shoving this forcibly into the hands of all of my comic-loving friends, because this one has a universal sort of appeal with its sense of action and adventure and humor. I'm also pleased to see it's only the first book, with more to come.

I received my copy of this book courtesy of the publisher, First Second. You can find THE NAMELESS CITY by Faith Erin Hicks at an online e-tailer, or at a real life, independent bookstore near you, starting on Tuesday, April 5th!
Posted by Sarah Stevenson at 11:51 AM
Labels: AF, Diversity, Fantasy/Sci-Fi, Graphic Novels, Historical Fiction, Reviews