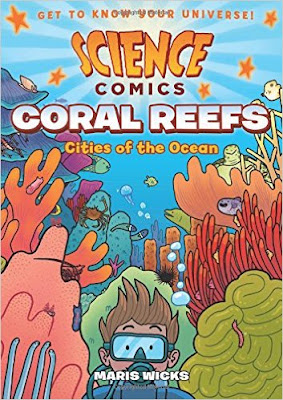 Synopsis: First Second Books' new series Science Comics is no doubt something that I would have loved as a kid. There wasn't nearly the selection of graphic novels or educational comics in the 1980s, though. I had a pretty good collection of Charlie Brown's Super Book of Questions and Answers and a cartoon-illustrated book about science that I got at the Exploratorium, but that was about it for my collection of science comics. (At least, until I was a bit older and discovered Larry Gonick.) If I'd had Coral Reefs: Cities of the Ocean I would have been thrilled. It's part of a new-ish series of Science Comics on a range of topics by different comics artists.

Maris Wicks, who created the graphic novel Primates (reviewed here) for older audiences, is the artist and author of Coral Reefs, and her depiction of the fantastic forms of life under the sea and in coral beds is inviting, charming, colorful, and funny. And, of course, educational. The book is divided into chapters that cover everything from how coral reefs are formed, to which animals live there, to how coral reefs and oceans are an integral part of the planet.

Observations: I was impressed by the science part of the book. It's substantial—it doesn't talk down to kids or avoid presenting new vocabulary—and makes excellent use of illustrations and diagrams to keep it from ever feeling too heavy or dense (although very young readers might have to skim over the science-speak). Everything from water molecules to phytoplankton to fish is depicted with personality, telling its own story while also making the point that our planet is alive, filled with living things in a vast network that includes us.

The narrator of the story is a little yellow prawn-goby, a tiny fish that lives in coral reefs. Unlike with Nemo, there's no need to resort to a family tragedy in order to feel sympathetic to this little guy. Our goby friend is ready with a smiling face and intellectual hipster glasses, well suited to the task of zipping here and there in the reef and doing the heavy lifting of breaking down the chemistry, biology, and ecology of ocean life. The artwork is simple when it needs to be, and more complex and scientifically accurate when called for, without losing a consistent colorful charm throughout.

The book also contains some supplemental educational material, giving it additional heft for classroom use: a glossary, of course; a bibliography and list of resources; and an in-depth diagram of a coral polyp.

Conclusion: Coral reefs and sea creatures are just plain cool. I personally learned a lot, was reminded of knowledge I hadn't thought about in a while, and enjoyed myself in the process. The smiles on the characters' cute little faces made me smile, too—I imagine it was very fun to draw all the different types of animals and organisms. Though written for kids and tweens, this would be an enjoyable read for anyone of any age who wants an introduction to the topic with both breadth and depth. BONUS: Tune in later this year for an interview with Maris Wicks—I can't wait to ask her more about Mr. Goby.

I received my copy of this book courtesy of the publisher, First Second/Macmillan. You can find CORAL REEFS: CITIES OF THE OCEAN by Maris Wicks at an online e-tailer, or at a real life, independent bookstore near you!
Posted by Sarah Stevenson at 11:48 AM
Labels: AF, Graphic Novels, Middle Grade, Nonfiction, Reviews