But if it had to perish twice,
I think I know enough of hate
To say that for destruction ice
Is also great
And would suffice.
~ "Fire and Ice," by Robert Frost

I was so impressed with newcomer Charlie N. Holmberg's Magician series last year that I immediately snapped up this book on name recognition alone... only to find that the books are, for the most part, nothing alike. The heroines are both hard-headed and exasperating (Holmberg does that well), and the towns are both kind of an industrial-revolution era small town with industry and a single school, but magic is something scary that Other People do in towns far away, and marrying well seems to be the goal for a young girl, rather than having a career of one's own - or maybe that's only the way it seems because the main character only thinks in terms of what people think of her. Anyway, it was a transition to get into this book, with such a self-absorbed protagonist. Remember Nellie Olsen from the Little House TV series? This novel is a logical progression of a "what would happen if someone acted like that all the time" novel, because the comeuppance is hardcore. This is also a deeper look at emptying out oneself for someone else -- even when you'll get nothing back, and you know it, and it hurts -- and a pretty heartfelt exploration of loving life enough to cling to it, and falling in love, too. Prepare to "Aww" at the smiley, happy ending.

Summary: Smitha: A girl so cold, she'll give you freezer burn...

Smitha's house is the second largest in the village, and the prettiest. Smitha's friends are the smartest, and the best liked around. Smitha is the prettiest in her family. Smitha is ... pretty central to Smitha. Which is to say that she's kind of a self-centered, tiresome little git. When she's avoiding the attentions of her father's hired man, she does so in the most callous, cold, and cutting way possible -- just because. I mean, shouldn't he know better than to try for someone as perfect and awesome as she? Humility in the face of such perfection is obviously impossible -- and comes back to kick her right in her padded derriere, because the guy her father hired, and whom she just so humiliatingly blew off is a wizard who had run away from the wizarding wars... and he has just enough nasty magic left to curse Smitha to be as cold as her heart.

This becomes rather literal - because Smitha's heart is sub-zero - and it's very clear that she's the author of her own destruction. But, it's still hideous - not only are her tears icicles, her spit frozen and her blood sluggish, perpetual winter follows her everywhere. People in her village sicken and die, and Smitha is cast out -- forever. There follows a tale of horror and despair, of fury and resentment, of deception and slyness, personified by Death (who is called Sabriel), of a handsome Prince and his noble cohort, an exotic desert kingdom, a survivor who learns to give up everything -- and an improbable and heart-warming happily ever after. It's the perfect fairytale. 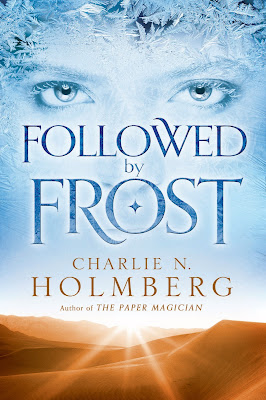 Peaks: There's a lot to like about this book - the descriptiveness and storytelling are all-consuming, as always. This slows the pacing, but there's a thoroughness to the telling that draws the reader in -- sometimes with the horrified curiosity of watching a car wreck, but we're brought along nonetheless.

Smitha is perfect. I loathed her. Thus, the author did her job, in creating an absolutely abhorrent character whom readers nonetheless will want to continue reading anyway. If you kind of hated Nellie Olsen or the girls in "Mean Girls" but watched them with a sneer - not looking away, but still sneering - you know what I mean.

We get so many interesting and nuanced personifications of Death - I think of Martine Leavitt's Keturah and Lord Death, wherein Keturah puts him off with stories whilst he courts her, of Robin LeFevers' Assasin series living in the shadow of Saint Mortain, and of course, Sir Terry Pratchett's Death, who loves kittens and rides a noble steed called... Binky. I kind of liked that of all the Deaths in fiction, this one was... insidious. And awful. And kept. coming. back. He was scary by his mere seductiveness. Which is really awful and true to life, and is possibly a portrayal of death as something which seems desirable sometimes, for people in severe depression, as Smitha was. Fortunately, Smitha's basic nosiness about what the next day holds, and her insistence that things have got to get better turns out to be stronger than her need to lie down and give up - and she keeps getting up, as we all must do.

There are people in this book who are not Eurocentric, and while their country and its people are entirely foreign to Smitha, and she clearly is blonde and golden to their brunette and bronzed, I appreciate that they're not simply there for exotic effect, and that Smitha attempts to become a part of their community and take them as her people, too.

Valleys: I really didn't find any valleys, although some readers will find the pacing in the beginning and throughout a little slower than they would like. Smitha is, initially, excruciating -- I wanted to get away from her, badly. However, the action soon takes the reader's mind away from the general awfulness of her character, and once things start happening, the novel moves along reasonably enough. While there still is a lot of thinking and a lot of time spent in Smitha's inner mind, things speed up a bit. While this may not work for some, others will eat it up with a spoon.

Conclusion: We're privileged to have another book from this author, and I'm happily expectant that the next will be just as fun. This book is wildly different from her last series, and shows her range.


I received my copy of this book courtesy of 47North. After September 22, you can find FOLLOWED BY FROST by Charlie M. Holmberg at an online e-tailer, or at a real life, independent bookstore near you!