I remember M.E. Kerr. My sister had a book called DINKEY HOCKER SHOOTS SMACK, and I was in grade school and thought the title sounded awful. Who'd name their kid Dinky?

With books, though, curiosity traps me every time, and the fact that Dinky was a girl was even more enticing. Though the book was slightly dated and Dinky wasn't someone I entirely understood, there was something about her voice that seemed very real, and, being me, I simply read through the whole shelf of M.E. Kerr books in the library. Thematically, this collection of short stories -- and really, all of the work of M.E. Kerr -- is about identity and the teen protagonist. Teens are in the process of becoming, and Kerr celebrates that becoming in myriad books.

Marijane Meaker - the real surname from whence came M.E. Kerr - had other pseudonyms and wrote bestselling mysteries and suspense, articles for the Ladies Home Journal, and more. Her young adult books, though, remain the jewels in her crown.

"Strangers take a long time to be acquainted, particularly when they are from the same family." - We Might As Well Be Strangers, by M.E. Kerr

Summary: If you enjoy family stories as much as I do, you'll enjoy this book of shorts, set largely in the 1970 in New York and environs. M.E. Kerr writes about the teen as separate from the family through choice, interest, and the mere act of becoming a young adult. Themes of identity and being true to that emerging self beat strongly throughout. These fifteen short stories are drawn from various magazines and anthologies, published from the eighties through the early 2000's. Much of the time, it's not as clear that the stories are that old, but the descriptions of teens intent on marrying after high school, of having no ambition for after college but to be "college educated," and of them going to the hairdresser (!) or worrying about sitting by the phone (rather than carrying it with them) date a few of the stories, but only a little. 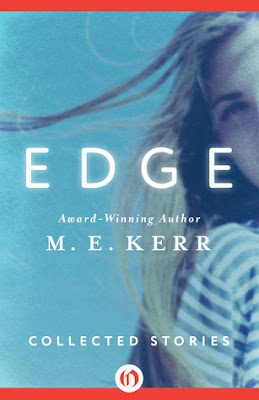 There aren't all happy endings - as a matter of fact, most of the stories meet the reader's regard in a way that is deeply enigmatic, not painted in distinct shades of happiness or unhappiness. One of the strengths of M.E. Kerr's writings is her ability to let ambiguity simply... sit there. Modern readers may be unused to the moment of discomfort when a story ends not with a jarring, abrupt note, severing you cleanly, but with a dying away that lingers in the mind. Kerr's stories stick with you.

Of the happier stories, "Sunny Days and Sunny Nights" was one of my favorites, as a girl learns to identify what she wants out of the man she loves, and to ignore what her father wants in a husband for her. My all-time favorite "Grace," is about a self-conscious minister's son who loves his boring old father, though his father embarrasses him by existing - until he doesn't. "Son of a One Eye" is a poignant story about a boy who never fits in with the fraternity he didn't want to join - but finds a world for himself in his imagination. Readers will be glad to see "We Might As Well Be Strangers" which was included in the 1995 AM I BLUE? anthology. In every story, the voice remains so very constant - there is a steady, singular I which informs, even from the third person, about alienation, outsider status, the Other, and being outside of the circle, looking in.

Conclusion: Before there was e.lockhart or Rachel Cohn or the surreal landscapes of A.S. King, there was M.E. Kerr, watching, recording the inner world, telling the true, and playing it back for us to hear.


I received my copy of this book courtesy of Open Road Media. You can find EDGE: COLLECTED STORIES by M.E. Kerr at Open Road or another online e-tailer near you!