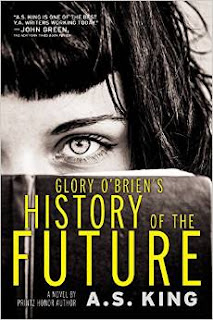 Summary: I don't know why I put off reading this one for so long. I really love A.S. King's writing, and every time I read one of her books I'm pretty much blown away. This one's no exception. Trying to summarize it is only going to make it sound truly bizarre, but it IS bizarre in a most wonderful way, so here goes.

Glory O'Brien has a fairly circumscribed world. She lives with her father—her mother committed suicide when she was four, and it's left a gaping hole in her life as well as making her father lose his own way. Her best friend, Ellie, who is basically her only friend, lives in a commune across the street, but Ellie doesn't quite understand. And what neither girl realizes is the extent of the ties that bind them and the threads of love and loss that reverberate through their lives and those of their families. Things only get more complicated when they (here's the bizarre part) get bored and frustrated one night and decide to drink a desiccated bat for no real reason other than it's there, and they're there, and everything seems topsy turvy anyway.

After that, everything changes. Glory and Ellie both begin to have visions—whenever they meet someone else's eyes, they see that person's past, that person's future. And the future that Glory is beginning to piece together is not a pleasant place. Women are once again second-class citizens, and the New America is an all-too-believable place of war and extremism. What's more, Glory isn't even sure how she herself fits into it, or how she might have even a whisper of a possibility of stopping it. If it's even real in the first place...

Peaks: Like the author's other books, this one strikes that perfect balance between quirky and profound. Quirky might not even be the right word, but what I love about it is it doesn't shy away from the weird, the uncomfortable, the painful, the imaginative—things we as writers are often afraid to put into our writing because the risk seems too great. But they all interweave in this tale, which also manages to not fit neatly into a genre (which I like) but is something of an issue novel, magical realism, and sci-fi all blended into one. The SLJ reviewer mentioned Margaret Atwood's The Handmaid's Tale, and while the sci-fi aspects are only one part of this book, the comparison as far as genre fluidity is quite apt here.

What's interesting about a book in which the future is sort of foretold is that everything that happens has a sense of inevitability about it, and yet nothing here is predictable; in fact, it's a page-turner because of the real-life parts of the story just as much as, if not more so than the magical aspects.

Another thing I really liked about this book was the fact that the adult characters are not given short shrift; in fact, they're key parts of the complex plot that unfolds, whether they are present in the scene or—in the case of Glory's mother—painfully absent.

Valleys: I don't think anything A.S. King writes has any valleys at all. There, I said it. Insert fan-girl squeal if you must have sound effects.

Conclusion: Just read it. That is all.

I received my copy of this book courtesy of the Stanislaus County Library. You can find GLORY O'BRIEN'S HISTORY OF THE FUTURE by A.S. King at an online e-tailer, or at a real life, independent bookstore near you!
Posted by Sarah Stevenson at 3:41 PM
Labels: AF, Fantasy/Sci-Fi, Grief, Magical Realism, Mothers & Daughters, Realistic Fiction, Reviews