The Pineapple Express, she is expressing, and, at least on TV, there is extreme weather and pouring, driving, spattering rain. Here at home, it's just... like... raining. Which sometimes, despite all drought-without-end claims to the contrary, it does. Anyway. When it rains, I just want to read, and fortunately, here I am, doing just that!

Summary: The post-apocalyptic society has figured out a way to fix its problems with crime -- brain scans, to stop criminal behavior before it starts. While this does away with innocent until proven guilty, its' not as if there are courts and trials anymore anyway - it's the will of the Cardinal who makes the world work. Anyway, it's not that bad -- the guilty are taken away from the MidWest Territory into the PIT (Permanent Isolation Territory) before they can transgress, and the rest of the community goes on in happy comfort. Every citizen of the Territory is tested at the age of sixteen, the boys in their prom dresses, the guys in their tuxes. It's a kind of coming-of-age thing, where first contacts for eligible partners are found and formed. All everyone has to do is approach The Machine and be scanned. That's all. It's the rite of Acceptance, and it's just the first step toward being an adult. Sixteen year old Rebecca is ready. She's well-dressed, well-educated -- well, as far as girls get educated, anyway - and well-versed in the things that will make her a functional member of her society. She is ready to be a mother, a nurturer, and a pillar of the home in support of her husband. Unfortunately for Rebecca... her first step into the adult society is her last. The Machine claims that she has a criminal mind, and her life is now in the penal colony with the rest of the losers. Rebecca - who knows nothing of how to survive, only how to sew and make casseroles, is thrown into a refugee-style camp with psychopaths, murderers and rapists. And, as she believes, she deserves it. 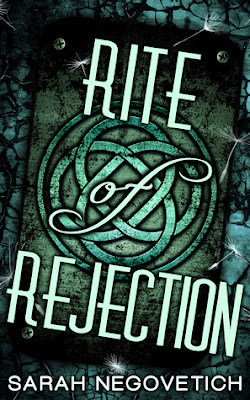 Peaks: Every time I think, "Okay, enough, I am well sick of post-apocalyptic novels," I find another which mildly intrigues me. While the concept isn't entirely fresh, I did find that the execution was somewhat original. Rebecca is not plucky. She's not heroic. She's passive, an observer, and naive. As a matter of fact, she doesn't even TRY to save others or herself at first, and that kind of pissed me off - but it's realistic to how some personality types would react when thrown into the system in innocence - she really didn't know how to handle herself, and she suffered for it. Because her whole life had been spent acquiescing to authority figures; first her mother, then the State, she didn't even have the emotional wherewithal to say, "They say I'm bad, but I know better, because I know ME." She hasn't a rebellious gene in her DNA. She simply accepted what she was told. Does this make her kind of dumb? ...For me, it just made her really young, possibly younger than her age. She was prey because her society created prey... but they also somehow saw in her that she had the potential to become an apex predator, which they didn't want.

Second, Rebecca finds herself in a love triangle that isn't a real triangle because she... doesn't like one of the guys. While allegedly the heroine of the novel, Rebecca is at times alarmingly passive, and just sort of ...waits for the situation to resolve itself. Um.

Finally, while in many ways this novel is a brilliant exploration of societal expectation for women and of the struggle to balance freedoms vs safety through government intervention, I felt that it was largely disingenuous in its avoidance of certain issues. This is a post-apocalyptic America, yet the issue of race, as linked to criminal mindsets in American society, which is a HUGE and pervasive conflation which has persisted from slavery onward and is largely responsible for racial profiling and vastly inequitable policing - that issue is ENTIRELY absent from the novel. As a matter of fact, there is a mixed race relationship in the novel, and it's like - nada. Nothing at all strange about that, no thoughts that Rebecca has, as coming from a struggling middle-class home, any prejudices or ideas about race or class or crime. I really cannot understand how this would have just been conveniently washed away when society has been pushed back into pre-Victorian ideals for women... they were, at one point in our history, either chattel or at least seen as "less than," as were slaves or people of other ethnicities. I find it difficult to see how the post-apocalyptic society would pick-and-choose on that score and only limit women's upward mobility, especially when the Cardinal's entire platform is "see how good I am at preventing crime." Maybe this is a specious argument, but I really do feel like it was disingenuous of the author not even to touch on this. Maybe the society has figured a way past this, but privilege is an ingrained, reflexive and very convenient-to-return-to privilege. To leave this out of the novel entirely and expect that to be believable didn't work for me.

Conclusion: Entertaining yet uneven, this first book in a post-apocalyptic trilogy will intrigue plenty of readers who love the genre.


I received my copy of this book courtesy of the publisher. You can find RIGHT OF REJECTION by Sarah Negovetich at an online e-tailer, or at a real life, independent bookstore near you!

Posted by tanita✿davis at 11:07 AM
Labels: Dystopian, Fantasy/Sci-Fi, Post-Apocalypse Fiction