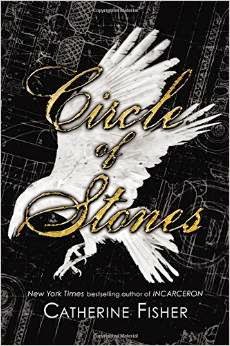 Summary: I'd just like to start by saying how much I have LOVED Catherine Fisher's work so far--both the Incarceron books and the Obsidian Mirror books. Incarceron in particular is up there with my (admittedly rather long) list of favorites. So I was excited to see her latest in my library: Circle of Stones. Unlike the others, this one is a stand-alone; somewhat like Obsidian Mirror, Circle of Stones involves intersecting characters and timelines that weave ever closer, not entirely comprehensible in their relationships until the end of the story.

This one's got three stories in three different timelines, to be exact: the briefest--almost atmospheric and mythical in its feel--is the story of Bladud, an ancient druid king. Then we have the alternating stories of Zac, an architect's apprentice in the 18th century, and Sulis, a mysterious young woman hiding from her tragic past in modern-day Bath, England.

Peaks: In fact, all three stories take place in what is now the city of Bath; what was already in Zac's time the burgeoning spa city of Aquae Sulis (the waters of Sulis, a local indigenous goddess who became absorbed into the Roman pantheon as Sulis Minerva), where the wealthy and poor alike would flock to take the waters. Having been to Bath a few times, and having just read a rather interesting non-fiction book called Hubbub: Filth, Noise, and Stench in England about English city life in the 1600s and 1700s (Bath was one of the cities featured in the book), I was really intrigued to read a story set there at different times in its past.

Of course, one of the wonderful aspects of Fisher's writing is that you don't have to have visited Bath to get a feel for its buildings of sandy golden stone and its bustling but still somehow magical tourist section with its Roman and Neoclassical buildings and its ancient cramped medieval alleyways. Sulis, in modern-day Bath, shows us the city in all its glory, working at the Roman Bath Museum and trying to regain her independence in her new life. All is not well, however, as Sulis begins to feel that her past is catching up with her. In THE past, meanwhile, Zac helps the architect (fictitious, but loosely based on a real person) Forrest try to realize his dream of a circular court of houses, all connected by the facade, perfectly aligned like the stone circles of old. That circle--the King's Circus--is where Sulis lives, so we know it was built--eventually. But at what cost, and with what sacrifices? The intertwining storylines are very subtly done, and nothing ever feels forced or prodded into place. Both Zac and Sulis are sympathetic and very real-seeming teen characters; the suspense created by Sulis and her ever-increasing sense of impending doom helps move all three stories along.

Valleys: This isn't the same sort of action-packed fantasy quest that Incarceron was, nor is it a desperate race to save the world, like Obsidian Mirror. Those looking for more adventure will instead find a quieter story about transcending one's past to become somehow more, about living with and moving past the flaws in our own hearts so that we can embrace our full selves and what we are meant to ultimately be. (Can you tell I'm trying not to give too much away?)

I also have somewhat mixed feelings about the end of Sulis's narrative. I think it's because I expected a story that was more based on fantasy, that had more actual magic, but instead the magic here is a touch, an aura, the ghosts of the past. It's well done, truly. But in this case, the defying of my expectations felt a little bit like, "...Oh. So that's what this is about."

Conclusion: Overall, though, I really did enjoy this book. If you like Catherine Fisher's other work, give it a read. If you liked The House on Hound Hill (which I really did), and that sense of the past imbuing a place with ancient echoes, read this one.

I got my copy of this book at the library. You can find Circle of Stones by Catherine Fisher at an online e-tailer, or at a real life, independent bookstore near you!
Posted by Sarah Stevenson at 1:58 PM
Labels: AF, Fantasy/Sci-Fi, Historical Fiction, Realistic Fiction, Reviews, Suspense