This book is non-fiction, and was originally self-published, because the filmmaker Nick Gray was so convinced this was a story we should know. Nonfiction what we usually review on the blog, but though this particular tale is about two real boys, they are part of an ongoing story about a culture clash, a small group being swallowed up by a larger group, and religious differences. Their story is about growing up, finding convictions, leaving what only looks like safety - and finding the will to go forward into the unknown, in hope of the real thing. I was attracted to this book because when we lived in Glasgow, one of our flats faced a Buddhist temple, and we often saw priests going about their lives in their saffron robes, riding bikes and sipping Irn Bru. It never even occurred to me to ask why they were there, or where they'd come from, or if they'd always been in Scotland. It feels a little silly now, when they were so friendly, that I never asked...

China invaded Tibet and annexed in 1950... and, because it was a tiny country far away, nobody really did more than shrug. But, looking at the faces of the boys on the cover of this book, we know that they were real people whose lives changed terribly that day. Ironically, this past week, I got a colorful flyer in the mail advertising a National Geographic trip to Tibet. It's perfectly safe, the travel guides assure us, for climbers and mountain-lovers from other nations. Privilege strikes again.

The narrative is straightforward and the prose is clean. The author, together with a forward by the Dali Lama, lays out the political, cultural and religious situation in Tibet in a simple manner, and then explains what people are doing about it. Though the danger is very real, the risk very high, and the violence dreadful, the narrative voice remains pragmatic and low-key, letting the story simply unfold as it will. Readers are left with a bittersweet account of brothers choosing a better life that will appeal to pilgrims and sojourners in every culture.

Summary: It is 1994. Tenzin is eleven, and he, his mother, and two brothers have been working their tiny farm in Tibet for as long as he can remember. His nineteen-year-old brother, Pasang, has been gone now for five years - five years, since he to the Buddhist monastery where he was training to be a priest, and a little less than that since he ran away from the monastery. Suddenly, Pasang is back, and while Tenzin is excited, he's also beginning to realize faintly that his brother being back isn't all good. When he'd run away, the Communist Chinese authorities has searched the village and threatened his mother. Now that Pasang's back... they're at it again. Refusing to hide, Pasang faces his accusers. Sneering, swaggering, and eying him, the soldiers bully and press. They're just waiting for Pasang to do something. So is Tenzin. Pasang has a quick temper and restless feet. If he doesn't explode and pop a guard in the nose, Tenzin is terrified his brother is, one night, simply going to disappear into the anonymous world. Pasang and his mother are already having quiet, intense talks when he's not close enough to overhear. Tenzin is heartbroken - his brother has served as his father as well, and when Pasang is gone, Tenzin has to step up to help protect his smaller siblings and his older brother whose developmental delays have damaged his brain and left his body strong. What will the family do without Pasang? 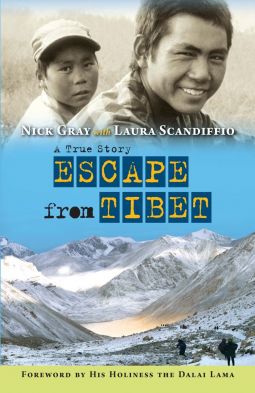 Then one morning, instead of walking to school, Pasang tells him to get up in the ox cart with he and their mother. Pasang is going to take him away - to India. Mother refuses to leave - can't see letting their youngest sibling go, and knows the older one will just slow them down, so Pasang has chosen Tenzin alone. There's nothing for him in Tibet, where they can't practice their religion as they want, and show their cultural heritage. There's no point in staying, Pasang explains carefully. Tenzin is just ecstatic to be adventuring somewhere. But, his mother weeps - and soon, the trip on the bus to the big city doesn't seem like a big deal. They can't use much money, so they sleep on the streets -- Tenzin has to learn a few words of a Chinese dialect so that they can beg - and everywhere, soldiers are rousting the beggars and putting them in jail. Everything feels dangerous, and repeatedly Pasang snatches them away, just ahead of danger - but others don't always make it to safety. Eyes wide, Tenzin soon learns the brutality of the Chinese military. And then, he and Pasang get caught.

Only contempt for their abused bodies by the soldiers who have hurt them allows them to escape at the last. A fortunate meeting with a monk connects the brothers with a guide, and others looking to cross the Himalayas. It won't be easy -- climbing near the pass where Americans go up over Everest -- it's suicidal. It's insane! But, Tenzin realizes, it's that, or go back home.

Through altitude sickness, snow-blindness, frostbite, bad food, scabies and and incredible weariness, an eleven-year-old and a nineteen-year-old make an incredible journey to a life that makes sense to them - a life where they can practice religion or not, a life where they can be free. From myriad setbacks to their triumphant meeting with the Dali Lama, Tenzin's subsequent realization that he and his brother are in a movie (he was so sick he doesn't remember being filmed) and being granted the freedom to become British citizens, the novel tells a fantastic story which is a bit scary in parts, but would be perfectly suitable for Middle Grades and up.

I actually fiddled around on Youtube and found ...Tenzin had posted the film! Which is pretty cool. If you have an hour, it's a documentary, and shows he and his brother on their journey, and shows a little of what happened next. They live in England now.


I received my copy of this book courtesy of Annick Press. You can find ESCAPE FROM TIBET by Nick Gray with Laura Scandiffio at an online e-tailer, or at a real life, independent bookstore near you!