Two things to get out there right away: 1. I received a review copy of this book from First Second, and 2. I'd definitely recommend this one for an older YA/crossover audience, due to some fright/violence/swearing moments.

I'll also come right out and say THIS: this one is WEIRD. It is surreal, and it is bizarre, and yes, it all holds together in an utterly take-it-as-it-comes, magic-realism sort of way. It is layered, stories within stories, meta upon meta. Sometimes it's confusing. Is it the story of Sherwood, a kid who walked into a cave with his brother, ended up killing a scary, zombie-esque Shadowsman and finding an amulet and never being the same again? Or is it the story of Hollis, kid-in-a-superhero-costume, decades later, next-door-neighbor to grown-up, alcoholic, troubled Sherwood? Or is it the story of the Wrenchies of the title, a gang of kids in a post-apocalyptic wasteland, fighting zombies until they reach their inevitable adulthood and become zombies themselves? (Hmm, symbolic, that…) Are the Wrenchies simply a comic book created by Sherwood, or are they real? YOU DECIDE. (No, really. And then come tell me, because I haven't decided what's real and what isn't, in this story…or maybe the point is NOT to know.) 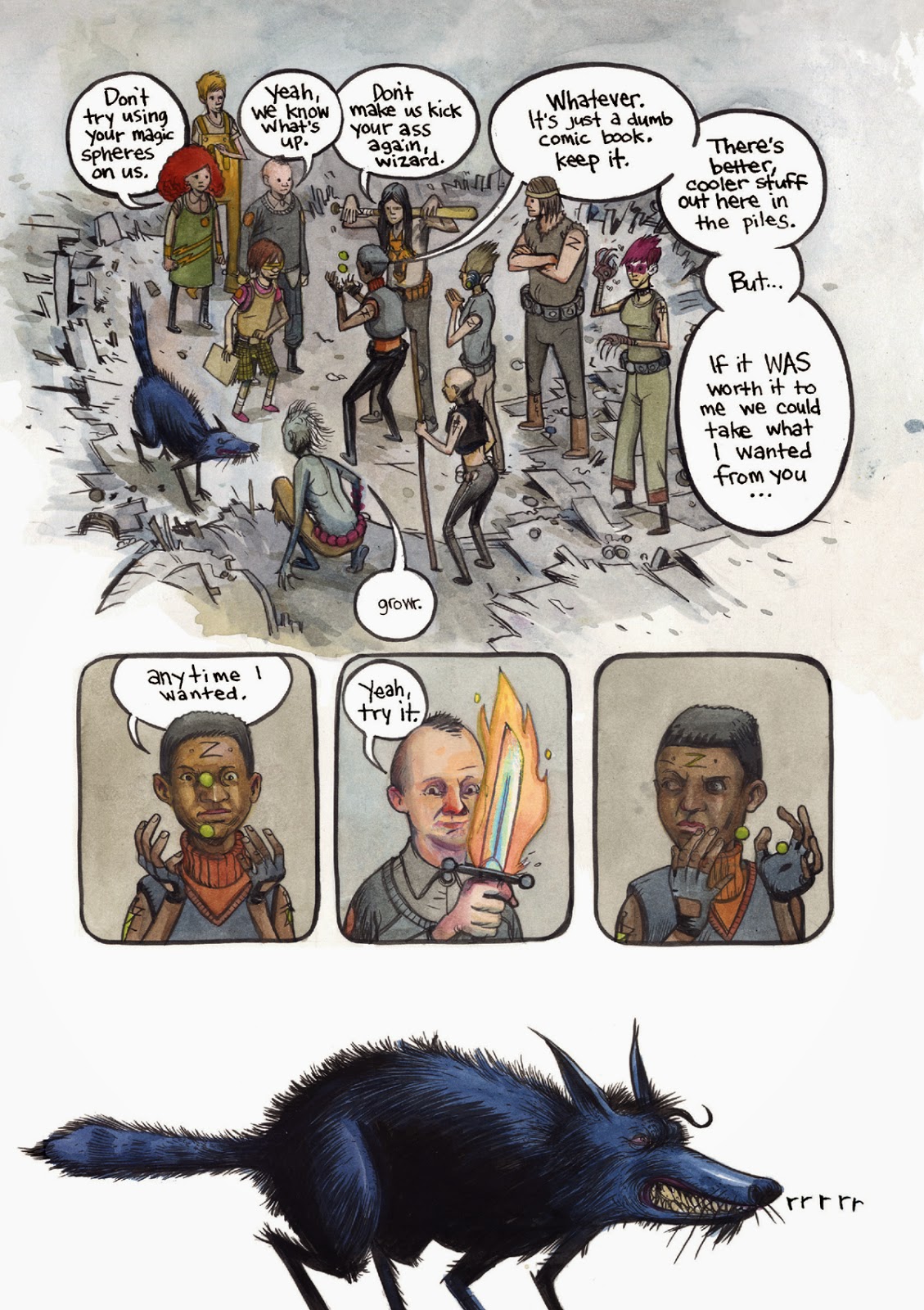 Oh, and the artwork. The artwork! This one has some of the most memorable, amazing, jaw-dropping artwork I've seen in a comic in a while. Scratchy and dirty and grim, yet fully-realized and beautiful; horrifying and gorgeous by turns (and sometimes at the same time). There were so many individual panels, small and large, that I felt were just little stand-alone masterpieces on their own. I can't even imagine how long this one took to draw. Or how the writing proceeded, for that matter—in a way it's almost free-form, stream-of-consciousness, but it's got so many layers, and things do sort of come together in the end. Kind of.

If you like stories you can easily follow and know what's happening, The Wrenchies might not be for you. But if you don't mind taking a ride through a strange world, with a lonely young boy named Hollis as your sometime adventuring companion, there is some fascinating stuff here. It's just…super difficult to talk about.

You can find THE WRENCHIES by Farel Dalrymple online, or at an independent bookstore near you!
Posted by Sarah Stevenson at 8:00 AM
Labels: Adventure, AF, Crossover, Fantasy/Sci-Fi, Graphic Novels, Guy Appeal, Magical Realism, Reviews