Monday Review: THE FALCONER by Elizabeth May 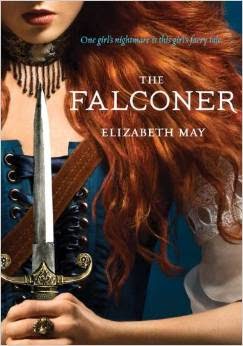 I enjoyed this book a lot more than I thought I might, given that it has faeries, and I'm sort of burnt out at the moment on the whole faeries thing. But The Falconer by Elizabeth May does something new with the concept.

What you'll get is Aileana, age eighteen, eligible young Victorian lady, secret weapons tinkerer, and vengeful murderess of faeries. A malevolent faery killed her mother, and now Aileana has been training hard for one thing and one thing only: that day when she'll meet that faery and kill her. In the meantime, she's hunting down faeries one at a time in her city of Edinburgh, where new murderous faeries seem to pop up out of nowhere every night. Her secret life—the life of a Falconer—comes with fighting, thrills, a smart-mouthed and honey-addicted pixie, and a sense of power like none other.

But will that power be enough? And what happens when Aileana's proper, widowed, conveniently distant father gets wind of her unorthodox activities? Can she confide in anyone, other than her faery-fighting guru, Kiaran—who also happens to be a faery himself? This is a rather rollicking adventure, with lots of monster-defeating and valiant battles (yay for girls who kick ass!) as well as gadgets worthy of a James-Bond-style spymaster.

The story puts Aileana in the position of facing hard questions about friendship and loyalty—and how much one might have to give up for the sake of a personal vendetta. But there's also a strong running theme throughout concerning power and powerlessness: Aileana's power in her secret nighttime life versus her relative lack of power by day, confined by the mores of Victorian society; Aileana feeling powerful when killing faeries in contrast to her powerlessness in the face of her mother's death. While I didn't love the potential for a human-faery-human love triangle, that aspect of the story didn't necessarily head in the direction I expected, either. Overall, an enjoyable read and a vivid, fast-paced adventure.

Thanks to Chronicle Books for the review copy.

You can find The Falconer by Elizabeth May online, or at an independent bookstore near you!
Posted by Sarah Stevenson at 8:00 AM
Labels: Adventure, AF, Fantasy/Sci-Fi, Historical Fiction, Reviews, Steampunk

I liked the cover of this one when I first saw it - but I'm a leeetle tetchy yet about books set in Scotland - sometimes brogues and such throw me out of the story. This sounds like it has enough going on, though, to keep even my picky brain busy!

You'll be pleased to know that the brogues were kept to a minimum. :)

I have this sitting in my "to read" pile. I'm now more excited about getting to it. Thanks for encouraging me to pick it up.

It was in my to-read pile for AGES, I'm embarrassed to say, mainly because it showed up unexpectedly. But hey, it turned out to be an unexpected bonus!