Thursday Review: I AM THE MISSION by Allen Zadoff 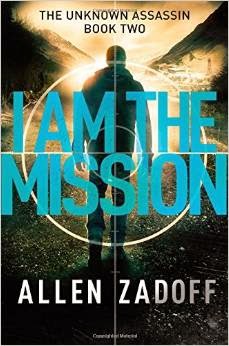 When I reviewed the first book in The Unknown Assassin series, Boy Nobody (click here for full review), I said it was a great addition to the YA thriller genre and a good "boy book" despite having a somewhat unbelievable premise. What makes this series transcend any minor grumbles I might have with the premise is the growth of the character, as well as a very close narrative viewpoint that keeps the reader engaged and riveted throughout the action-packed plot.

The second book in the series is I Am the Mission, and it continues the story of Boy Nobody as he struggles to maintain his faith in the goals of the Program even as they send him on a new mission that's more dangerous than ever. Father and Mother—his shadowy Program mentors—want him to prove his loyalty, but he's caught in one impossible situation after another. His latest mission sends him to a recruitment event for an extremist militia training camp for teenagers, run by the subversive and dangerous Eugene Moore. Moore's the target, and "Daniel" (as he's known for the purposes of this mission) is supposed to take out the target and get out of there.

That goal turns out to be anything but straightforward, and Daniel makes the difficult decision to infiltrate Camp Liberty itself and get close to Moore that way. The only problem is, the Camp is cut off from all outside communication, and Father and Mother aren't answering his hails. What's going on? And how is their radio silence connected to the operative that went missing four months ago—after being assigned the very same mission?

As in the first book, Boy Nobody is faced with the tough reality that these are not just targets he's dealing with, but actual people, with complex problems and reasons for doing things that make them much more than one-sided villains. But the Program wants him to obey without question. Trouble is, Boy Nobody is full of questions…not just about his mission, but about himself, and the things he can't quite remember. This is a good, gripping sequel to the first book—in fact, I think I enjoyed it even more because the nature of the mission, the setting of the militia training camp, felt very topical and frighteningly believable.

You can find I Am the Mission by Allen Zadoff online, or at an independent bookstore near you!
Posted by Sarah Stevenson at 3:17 PM
Labels: AF, Guy Appeal, Reviews, Suspense