Here's a novel from the great North - a good story to read on a rainy afternoon with a box of gingersnaps and a cup of tea.

Did you read A CHILD CALLED IT? or THEY CAGE THE ANIMALS AT NIGHT, or perhaps Torey Hayden's BEAUTIFUL CHILD? Did you, at one point, LOVE Lurlene McDaniels and read and reread RUNAWAY by Wendelin Van Draanen? If so, you had an overabundance of imagination like me. We grooved on THE LITTLE PRINCESS by Frances Hodges Burnett or THE GREAT GILLY HOPKINS, by Katherine Paterson, expecting to be orphans, and to find horror and hardship, and then, one day -- a secret garden... For some reason, there's a phase of adolescence that includes reading novels about runaways, broken homes, orphanages or foster kids, and trauma, and ... I dunno. We used to call it 80's ABC After School Special YA lit, but it's bigger than that. It's like the horse phase, I guess. Some of us just have to go through it.

Some of the books are mawkish sentiment, and they don't hold up over time. And, others of the books... are like magic.

This is one of the magical ones.

Poignant and vividly detailed, this novel has moments of sadness, stories of pain and grief leavened through time and chores and staring out at a glorious lake. There's an overarching theme of redemption, and the healing effect of time, listening, and, at last, hearing. A beautifully simple, silhouetted cover makes use of the clearest of evening light - a gorgeous cover, I might add. I should also include this caveat: if you pick up this novel, give yourself a couple of hours of uninterrupted time. You won't want to put it down.

Concerning Character: Rachel struggles. Her caseworker does her best, but she's run out of placements. The last place where Rachel was kicked out came with a lot of screaming and fury. She'd been careful, after getting arrested for breaking and entering, for essentially stalking a family until they left on vacation, and staying overnight in their home. She was only going to pick herself up a treat - a pack of Juicy Fruit, as a little relief from having to share her room with yet another new girl... but she got busted... and, since she was being brought home by the police at the very same moment her social worker was right there, with the new girl, away she went, her former foster mother's curses resounding in her ears. Rachel went back to the holding pattern that has been her life for the last five years, since her mother and brother were killed in an accident. Rachel is mouthy, stubborn, and very, very angry -- about everything, with everyone, all the time. It's not much of a life, and it's a little life that looks like it's going to get smaller... because her next placement is out in the BOONIES -- in the sticks. On a farm in the middle of nowhere, in the great, empty North. Walton Lake. Who'd even ever heard of that?

The place is straight out of the 1800's. Rachel's afraid they don't even have electricity and running water.

She'd run away, if she could figure out where the heck she came from... 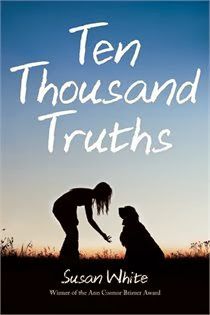 The other kids are circus freaks - Balloon Boy is so immensely fat that she's surprised he doesn't blow away, and the twins, Tweedle Dee and Tweedle Dum are just unnervingly twinnish and silent. The ringmaster in this little sideshow is the nastiest, wartiest-faced old woman Rachel has ever seen, and she spouts facts like she's a Guinness Book of World Records. Rachel has no idea what she's doing there. She doesn't belong. She's not a freak, and there's no way anyone can make her stay. And the rules are STUPID. She's required to spend an hour a day alone, at the lake? And "do your part" - what's that mean?

Before long Rachel realizes it's too complicated to just leave -- there's that whole prairie, for one thing. And, it turns out, the home isn't so bad. Nobody yells, for one thing. And, the circus freaks aren't so bad. Even Amelia, the woman she'd once called Warty is... okay - she just has a disease, it's no big deal. The food is pretty tasty, and there's tons of it. The dogs are so cute! And the lake -- the lake ...

Before long, it looks like what Rachel's come up with is - a life. A real life, and people she cares about, who care about her. She finds something bigger than her own, small world in her dreams for Amelia, and far from being threatened by echoes from the past, she's finding the courage to face them, one truth at a time.

WARNING: Becoming snappish with those who interrupt your reading may damage relationships. Not everyone should attempt to drive to British Columbia. Tissues not included in the purchase of this book. Avoid reading while operating heavy machinery. Memorizing trivia may preserve your memory, but will not save you in every social situation. When a dog gives you a stick to throw, he has given you his whole world.


I gratefully received this book courtesy of the author and her publicist, in return for one Canadian penny's worth of thought. You can find TEN THOUSAND TRUTHS by Susan White online, or at an independent bookstore near you!

Posted by tanita✿davis at 5:00 AM

Very much enjoyed stumbling upon the review of my book Ten Thousand Truths. Thank you for such an insightful essay. I must however point out that the novel is set in New Brunswick not on the prairies as seemed to be inferred in your write up.
Susan White

@ Susan White ~ Aaaand, this shows how much I know about Canada, and I even have a friend who lives in New Brunswick! Corrected, and thanks for dropping by.

Oh, this one sounds so good! I did love A Little Princess, Anne of Green Gables, and the like. I may not have had a horse phase, but I definitely had an orphan phase.