When we selected Sarah Beth Durst's CONJURED as our first candidate for Reading In Tandem, AF and I had no way of knowing that we'd be so full of questions by the time the story ended! We both genuinely admired Durst's ability to both keep us in bewildered suspense and keep us with the character, completely in-step despite ourselves. We both admired the way that this novel is both clear-cut police procedural AND red-herring thriller, both romantic AND speculative. CONJURED, to us, is one of Sarah Beth's best, and so we are delighted to have her to come along and chitchat with us today.

If you'd like to catch her book giveaway at Cynsations, and read a little more about her take on balancing light and dark in a tension-filled mystery, please, hop on over to Cyn's place. Meanwhile, welcome, Sarah Beth!

Finding Wonderland: Can you tell us where Eve's story first began, in your mind, as you wrote Conjured? How did her story change (if at all) during the writing process? 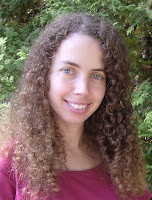 Sarah Beth Durst: Eve was supposed to be a minor character in a gritty urban fantasy novel about federal marshals in the paranormal witness protection program. She was supposed to be their first witness, an example of one of their cases. But as I began to develop her case, I couldn't stop thinking about her, this girl with zero memories and tons of bizarre powers... As soon as she made the painted birds in her wallpaper detach from the wall and fly around the room, I was hooked. I ditched everything I'd written so far and started an entirely different kind of book, more of a psychological thriller fall-down-the-rabbit-hole kind of story. I think of CONJURED as the book that crept up on me. 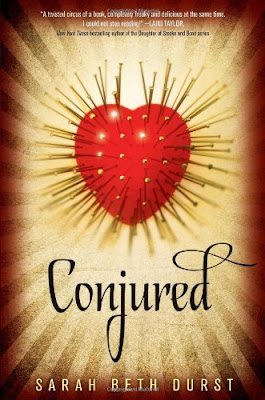 FW: Love that idea, that it crept up on you. It kind of crept up on AF and me, too! What was the most difficult aspect of writing this book? Did you find it tough to write a character who knows so little about the fundamental fact of who she is?

Sarah: Writing this book felt kind of like jumping out of an airplane. Except instead of breaking a ton of bones, I broke a ton of writing rules. For example, Eve is a true blank slate character. She doesn't just have no memories; she also has no identity. So instead of the reader discovering who the character is, the reader comes along with Eve as she creates who she is. I found that I had to write and edit this novel chronologically because Eve's ability to think and feel develops along with the plot. I really wanted the reader to feel the same sense of claustrophobic chaos that Eve experiences.

FW: Tanita and I really enjoyed the thematic depth of this book--you don't shy away from ideas such as the shifting meaning of good and evil, or the nature of friendship. As the author, what theme ended up being the most resonant or most important for you personally?

Sarah: For me, the most important one is: be the true you. You choose who you are. You define yourself. No one else has that right. And you can be more than what others think or say you are.

FW: True. Love that. So, this novel is a LOVE STORY - all the blurting and unexpected emotions and confusion. We love love stories! What's your favorite part of the relationship between Zach and Eve?

Sarah: I loved writing the Zach and Eve scenes. Especially Zach's dialogue. He's a babbler. He also is a perfect fit for Eve -- he only tells the truth, and everything about her is a lie. Even though they seem so different, they need each other.

FW: Right. And, this is also a novel that is a COP NOVEL - all the gritty, serious-eyed drama of a police procedural, like CSI. We love cop novels, too - and you wrote about specialized law enforcement. Were there issues (copyright or otherwise) writing about WitSec, which is a real thing? How did you find your information about them? Do you have an "in" with the U.S. Marshals?

Sarah: I adore doing research! I think the more real details you can put in a story, the more believable the fantasy will feel. Plus I'm fascinated by the intersection of fantasy and reality. I love the idea that the magical can be just around the corner from the mundane and the impossible can be hiding beneath a thin veneer of possible.

For this book, I did do a fair amount of research into WitSec. My favorite research book was WitSec: Inside the Federal Witness Protection Program by Pete Earley. But the people and the office in Conjured are completely fictional. Kind of wish Malcolm wasn't fictional, though...

FW: HAH! Not gonna lie, I wish Malcolm was real, too. When's the last time a middle-aged African American man was that interesting and engaging in a YA novel!? He was a lot of fun.
Okay, so this novel is also a MYSTERY - at least AF and I count it as such - and we love mysteries. What was the hardest part about keeping the secret from the readers? When did you know that this was how it was all going to end - from the beginning, or did the conclusion sneak up on you, too? Are you a "pantser" or a "plotter," (to use the writing groupie vernacular)? Sarah: I'm a plotter. So I knew how I wanted the story to end before I started. But I didn't know exactly how it was going to get there. My process is to start with an outline -- really, just a vague bulleted list of events that often includes "something cool happens next" -- and then write a first draft. Then I toss the outline and write a new outline based on what worked and what didn't in that draft, and write the story again. Rinse, lather, repeat until it feels right.

Hardest part in keeping a secret is that by draft fifteen, the secret feels like the most obvious thing in the entire world. You have to trick yourself into reading it with fresh eyes. Sometimes I blast music while I edit to distract the part of my brain that wants to skip ahead.

FW: HAH! "Something cool happens next." That's about my skill level in outlining, only, sadly, I don't always know what that cool thing is... At its heart, this novel is also a FANTASY - and AF and I both really love the air of the fantastic in this novel. You talk about this book as having been part of a nightmare you had... and, now none of us want to be in your head while you're asleep, so well done, there. But, seriously, this was a dream? How much of your original opening - nightmare framework - ended up in the finished book?

Sarah: I love dreams. As often as I can, I try to lie still when I first wake up in the morning and remember whatever I dreamed about. Sadly, often my dreams center around forgetting to pack for a trip until the last minute and then missing my plane, or taking a plane instead of a train, or trying to drive a car without any wheels. Or else they involve lots and lots of spiders. But sometimes I can have really wonderful nightmares with creepy mist and rundown carnivals and aliens shaped like Gonzo... Some of those dreams ended up directly in Conjured. Okay, not the Gonzo alien dream, though that was one of my most common nightmares when I was a kid. It featured robot Gonzos that shot M&Ms out of their noses, but the M&Ms were robotic bugs that would burrow into people's foreheads and kill them, leaving only the M&M symbol behind... Again, not in the book. But several of the carnival scenes were either drawn from dreams or showed up in my dreams after I wrote them.

FW: *Note to self: Stay out of Sarah Beth's dreams...*
Seriously, this book has major crossover capabilities, in that we come to care just as much about the adult characters as we do the young adult characters. Is writing for adults within your plans, or are you going to stick with just writing, and let whomever read whatever?

Sarah: Starting next year, I am going to be doing two books a year: one for teens and one for adults. But I am happy for whomever to read whatever. I love that so many adults (including myself) are reading YA these days, and I know that I read tons of novels marked for adults when I was a teen. I think you should read whatever speaks to you, regardless of your age or the book's intended audience. For me, my first love is fantasy. So long as the book has a sense of wonder to it, I will happily read it regardless of where it sits in the bookstore.

FW: WOW. Yay, you, for just writing along! And, your fans THANK YOU for sticking with fantasy, you really do it justice. So, what do you most want readers to take away from this story?

FW: Are you planning to write more books in this setting, either sequels or just related books? What are you working on next?

FW: NOVELS FOR ADULTS! Wow, we're totally excited with you. Sarah Beth, it's been a pleasure to read your books over the years, and it's been awesome to have you by to chat. Thanks for being one of our fave authors, and a good interviewee. We wish you all the best.

Sarah: Thanks so much for interviewing me!
Hey, reader! Thanks for dropping by, and don't forget to pick up a copy of CONJURED by Sarah Beth Durst, available online, or at an indie bookseller near you.
Posted by Sarah Stevenson at 10:45 AM
Labels: AF, Author News, Happenings, Interviews