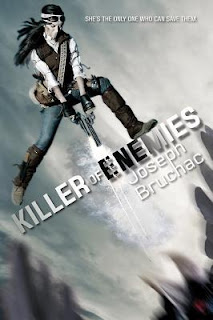 This is not a once upon a time story.

Years ago, seventeen-year-old Apache hunter Lozen and her family lived in a world of haves and have-nots. There were the Ones—people so augmented with technology and genetic enhancements that they were barely human—and there was everyone else who served them.

Then the Cloud came, and everything changed. Tech stopped working. The world plunged back into a new steam age. The Ones’ pets—genetically engineered monsters—turned on them and are now loose on the world.

Fate has given seventeen-year-old Apache hunter Lozen a unique set of survival skills and magical abilities that she uses to take down monsters for the remaining Ones, who have kidnapped her family.

But with every monster she kills, Lozen’s powers grow, and she connects those powers to an ancient legend of her people. It soon becomes clear to Lozen that she is meant to be a more than a hired-gun hunter.

Lozen is meant to be a hero.

This book isn't being released until September, so I will hold off my review to the end of the month, but I want you to know that IT IS KILLING ME, people, KILLING. ME. to do so. But, I do it for you. For you, dear readers. But, mainly so I don't have to hear all the grumbling about "why can't I have this book NOW." Yeah, yeah, just give it a month, all right? I'm sure we Cybils folk, at least, will be seeing this one again. Meanwhile, enjoy the author bio:

JOSEPH BRUCHAC is a storyteller, poet, and author of more than one hundred twenty books for adults and young readers. His work, which often draws on his Abenaki ancestry as well as the stories and legends of other Native peoples, has won numerous awards, including ALA Best Books for Young Adults, Boston Globe-Horn Book Honor, National Wildlife Federation Award, and multiple state association awards. Bruchac lives in Greenfield Center, New York. Find him online at Joseph Bruchac Dot Com.