I might have to come up with a different picture for these sorts of posts... can we really call it "turning pages" if no pages are ever involved? Never mind - you can use your imaginations and flip with me through these highly addictive, roundly-written pirate tales for kids. They're bite sized dramas - completely episodic - and leave you wanting more.

Reader Gut Reaction: These books are part of Lu Sylvan's "Book Bites" series, which means that they are short, easily "digestible" and fun, in an introductory sort of way, to readers who are often confounded at the idea of an entire book. However, too many times when people talk about books for "reluctant readers," they default to books which are shallow on characterization and overloaded on action. I'm pleased to say that this is not an issue with UNDER A BLOOD RED MOON and its piratical sequels. There's action - surely. There's quick thinking, there are lies and counter-lies, betrayal, bewilderment and a near drowning, all within the first few chapters. But, the characters are distinguishable, specific, and come from varying backgrounds. They each have a secret desire, and each have their own reasons for being where they are ... and this, not the length, is what is going to hook the elusive "reluctant reader."

Concerning Character: It isn't that Blossom has set out to be a royal pain - she hasn't. Not really. She's just the middle child OF middle children - there are tons of sisters above her, and tons below, and her parents have daughters coming out of their ears. She isn't needed at home. She isn't needed right now at all. She's going to make sure she's useful and ready to be used... when she is needed. So, she's just going to go off to sea and learn to be the greatest pilot the world has known. Right?

It would be all right, if Pym didn't feel he had to go with her. She's royal, yes, not just a royal pain, and he's her devoted servant. He'll do anything he can, to keep her out of trouble, including blackening a few eyes...

Casimir knows he's just one more mouth to feed at home, so it's off with him, to the sea. He doesn't know enough to be a sailor - too many knots, too much knowledge. He can grow cabbages, yes, but not much else. So, he's pretty sure only the pirates will take him...

Rollo is big and loud, and that's his only advantage, it seems. Sure, sure, he comes from pirates, the fiercest, most awesome, most amazing pirate king and queen in the world! But, he's not entirely sure that everyone believes it... not even him...

Four disparate voices, four different reasons, four competing secrets, and four sailors, apprenticed on for four years to do their best to learn their craft. Four characters for readers to identify with, cheer for, groan over, and observe on their hero's quest - because there's a lot of that in here. The first episodic novel "bite" ends with a decision: the players are in place, and they're going to do their best to do their jobs - learn what they can - and get out alive.

Did you think that melodramatic? Well, there's a distinct chance that not all four characters will make it. One has already nearly drowned, two have blackened eyes, and one more has had a knife held to their throat. These are pirates yes? They're not the calmest bunch. 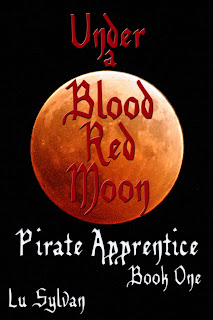 Recommended for Fans Of...: Johnny Depp in Pirates of the Caribbean, of course; Any of the Jacky Faber books, BLOODY JACK, etc., by L.A. Meyer; PIRATES! by Celia Rees; THE DUST OF 100 DOGS, by A.S. King; THE BIRD OF THE RIVER, Kage Baker; SASSINAK, by Elizabeth Moon; and, technically, SHIP BREAKER, by Paolo Bacigalupi

Authorial Asides: Lu Sylvan is a pseudonym. In her real life, while still an author, Lu Sylvan publishes in the traditional way, on paper, with ink, for Holt BYR and Harcourt, and she writes MG and YA fantasy and historicals.

Each of Lu's "Book Bite" books is $.99 and is available from B&N, Amazon, and they were written to painlessly and interestingly fulfill the "your child should read fifteen to twenty minutes a day" dictum that many teachers - and educational experts - rightly believe. Kids should read, but for those who find it borrrrrring and painful, these episodic ebooks really are a good answer. There are nonfiction ebooks to partner with the fictional ones - a factual book on lady pirates, and "Animal Bites" that are entertainingly factual about alligators, mosquitoes, wolves, and more.


You can find UNDER A BLOOD RED MOON by Lu Sylvan at her website, or at ebook retailers!

These sound like an interesting approach to hooking the reluctant readers. I suspect episodic fiction will make a bit of a comeback in the ebook/online format, which is not entirely a bad thing.