From L-Space to E-Space: Pratchett-y Crossover Novels from the NADWCon

AT LAST, we get to The Panel. 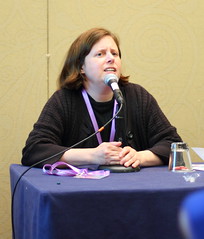 There was a little bit of a rocky start - it's never good news that the room for your panel has been moved, five minutes before your panel begins. It's less good news to be moved to a room where the panelist has run over his time by ten minutes, and you're afraid people are not only not going to be able to find your panel, but have gotten hungry/tired/thirsty and have wandered off, tired of waiting. However, aside from those sorts of worrying hiccoughs, we gathered in pretty good order for our panel Sunday evening. Charlotte Taylor of Charlotte's Library was our moderator, and together with Sheila Ruth of Wands & Worlds and Anne Hoppe, Terry Pratchett's U.S. Children's editor, we started talking about the Pratchett-esque in YA and children's lit.

Of course, that needed a disclaimer, because really? There's no such thing as a book LIKE a Pratchett book. The genius sleeting through the universe has landed in only one particular head just now. Thus, we were only able to talk about books which were "close" or had "Pratchetty-appeal." And no, Pratchetty is not a made-up word. 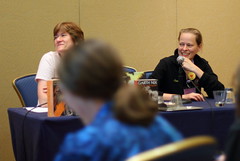 Some websites to start you off on finding books which are like Pratchett books in the SFF realm include NoveList, BookLamp, home of the Book Genome project, YALSA's Hub, Kirkus' blog, author-run The Enchanted Inkspot, SFF round-up site, Grasping for the Wind, the UK site, An Awfully Big Blog Adventure, and of course, The Cybils lists every year.

What was fun for me was to find that I'd read 99% of the books chosen by my fellow panelists. But, we didn't stop with that. We polled our audience, because we all wanted to know what THEY thought were good books, and where to find the funny, some poignant, fractured fairytale, philosophy and social satire types of books that Pratchett does so well. The fans didn't disappoint; they mentioned books and places to find them that I was scrawling down, hoping to find later. We were grateful indeed for Tech Boy's quick fingers on the keyboard as he typed down our audience suggestions. They may not seem Pratchetty to you, but had particular appeal for the readers who suggested them:

We want to thank everyone for coming out and talking to us, for asking questions and sharing their own reads. The conversation in literature is richer for having everyone speaking up and speaking out! Here's to more talk, more sharing, more reading and more writing.

*A word about Xanth: we had a brief exchange with the reader who suggested the Piers Anthony books, about the sexism we've discovered in a lot of them, - we loved the puns when we were small, but female-as-butt-of-joke got old. As with all books, read at your own risk.

Posted by tanita✿davis at 1:01 PM
Labels: Fantasy/Sci-Fi, Happenings, What We Do

This is awesome! Such great titles! I need to bookmark this page.

@LinWash: Do come back - I plan to refer back to this one myself.

Fantastic lists! Clearly I have some catching up to do--there are a lot of "meant-to-reads" on here.

You should read THE FIFTH WAVE. It was REALLY good. I'm anxious for a sequel. Impressive SF.

I haven't gone near a Xanth book since I was about 15, so I don't remember the sexism per se...I do remember the SEX, which was of course fascinating at the time.