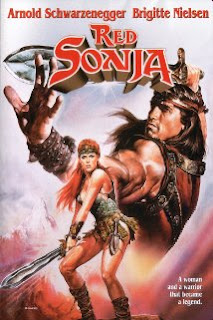 Here is a thing I am ashamed to admit: my childhood exposure to comic books was some hideous version of a cartoon-serialized New Testament that our neighborhood church handed out. This is not to say that there might not be some awesome versions - and if Gene Yuen Lang was producing it, I'd be all over it - but I recall these comic books as flat out awful, and I hated them on sight. So. My knowledge of Red Sonja as a comic book heroine? Is nil - all I know of her comes from a stupid 80's Schwarzenegger movie. And, since he's, like, the poster boy for strong women, you can just bet that movie was awesome and full of win. Not.

Oddly, I don't recall it as being all that awful, but keeping in mind that we watched it as part of Bad SciFi Night, I know it was truly wretched, just maybe not the worst of the heinous we'd ever seen in that film series. (And no, I won't watch it again to make sure.) So, to hear that some of my favorite authors, as well as an awesome-by-heritage (meaning, I've never played her games - not that she isn't awesome apart from her Daddy) game maker are involved in a 40th anniversary Red Sonja anthology is kind of interesting to me. Very, very interesting.

Although, if they keep her rocking that ridiculous bikini whilst wielding a scimitar, I am going to have Second Thoughts.

Okay, I'm intrigued. I was mostly just aware of the movie myself, for age-related reasons, but what an all-star cast of writers!

A new Red Sonja project??? You're kidding!!! Okay, with those names, I'm at least intrigued.