Wow - March has almost slipped away! This book is out in April, so I thought I needed to get a move on in reviewing it. This is kind of your "waiting on Wednesday" wait no more review - I know a lot of people are anxious for this one to come out. I feel privileged to have been offered it from Tu Books. Thanks, Tu!

Last time I encountered a Karen Sandler book, I came away with these questions: What is it that makes us human? What happens when we apply the one-drop rule to genetic modification? Does someone with a pacemaker still count as fully human, or partially automaton? How many ways will the upper classes use to justify creating a servant class? And is it already happening? And now, reading the sequel to the fabulous TANKBORN, I... can't say I have any answers. Yet.

Reader Gut Reaction: The second book in a trilogy is never, ever easy, and this one has those growing pains showing up immediately. For readers who have read the first book, the second begins slowly, with Kayla and Devak apart, and both of them working separately for the greater good of their newly formed society. There is almost what I would call misdirection in the first section of the book. We have a lot of time with Kayla and experience her inner mind, which is a mess. She's pining over Devak, only to discover he's not that into her. She's chafing at having to appear subservient to Risa, her lowborn Kinship partner, and she's worried to death at violent attacks against the GEN, there have been explosions, and the Brigade is getting all riled up. Changes are happening - changes Kinship isn't starting. Then, a GEN boy named Abran is hurt in an explosion. Risa and Kayla pick him up - but he might not be exactly who he seems. He might actually be the one who set off the bomb. Things are beginning to feel out of control...

Misdirection only works insofar as it gets the reader to look the other direction. Eventually, all of the pebbles of plot roll together in an avalanche, and the reader finds themselves looking - intently. The last half of the book, things start to click. The beginning being slow matters not at all - and I actually found myself going back, making sure I hadn't missed anything when I hadn't been as engaged. We're left not sure how things will end, and with a very clear understanding - there's a new game in town, and it's not about friendship or opening up new avenues of trust between Lowborn and GEN and Trueborn. It's not about Kinship, and who we thought was in charge isn't in charge any longer.

There are deaths, which are upsetting - and in some cases, downright gross, but remember, this book has, as its main character, a GEN, a genetically modified human being who was, once upon a time, someone else, until she was changed. That comes up again, and is actually more important than we first realize. 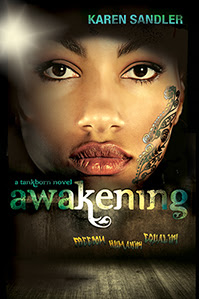 Concerning Character: While there are new characters introduced, there are few who readers need to remember. Minor characters who we'll probably see again will be reintroduced in the next book; the minor characters from Tankborn who reappear in this book are fully fleshed out, and adequately memorable. The more important characters, aside from Kayla and her friends, are mostly not human.

Setting remains almost a character - the varying landscape of the planet of Loka, its various religious groups, the castes and sects of allabains, who gather themselves to live a certain way, the tricky compromises of the Trueborns who have lost status, and live in sectors which are peopled with both lowborns and demi-status Trueborns, the enforcers, the Brigade, the ginormous, man-eating bhimkay spiders, the six-legged desert cats, the holographic house decorations. The worldbuilding in the Tankborn series remains one of my favorite things about it - imaginative and complete, though the names of things and people will be a little confusing to those just getting into it with this book, because with the GEN there are so many characters, but still, it's all solidly explained.

Scratch - a disease - is also a character in this book, in a manner of speaking. It has some overlap with smallpox, another disease which swept through populations of people who were unwanted.

The final new "character" in this novel is graffiti. The letters FHE stand for Freedom, Humanity, and Equality. Oddly enough, none of those three words are really present in this book... but the letters show up repeatedly. Those words, of course, bring to mind the slogan of the French revolution - "Liberté, Egalité, Fraternité ou la mort" - and many will agree that none of those things showed up in the French revolution for a long, long time, either. Is it any wonder that the third book in the trilogy, slated to be published Spring 2014, is titled REVOLUTION? And that it appears that this brave new world has possibly already lost its way? Can't wait to read this saga's conclusion.

Recommended for Fans Of...: Ender's Game, Orson Scott Card. Dawn, Octavia Butler. The Powers That Be, Anne McCaffrey. Beggars and Choosers; Beggar's Ride, by Nancy Kress. The Sky Inside, Clare B. Dunkle. Birthmarked and its sequels, by Caragh M. O'Brien. And tons more YA novels on genetic engineering, but none quite like this one, which also brings thoughts on class, caste, and color.

Cover Chatter: At first, I was just mesmerized by the face on the cover - kind of a floating head thing going on. And then, I wondered why the head was floating above the floor of a room? And THEN, I finally saw the graffiti. It took me a minute - I admit that I was distracted by a pair of eyes, and a GEN mark. As ever, I am not a fan of face covers, but I like this one. With the multitudes of GEN characters in the novel, it's probably better to stick with a single image on the front - but, if choosing between the graffitied wall and no face, or having a brown face on the cover? I like the addition of the face.

Authorial Asides: Did you know Karen Sandler has math and physics degrees, wrote romances for Kensington/Harlequin, and she's also writing a mystery, due out in 2013? A cross-genre writer after my own heart!


After April 1, you can find AWAKENING, Tankborn #2 by Karen Sandler at online, or independent brick-and-mortar bookstores near you!

Posted by tanita✿davis at 2:54 PM
Labels: Class and Identity in YA literature, Ethnicity and YA Literature, Fantasy/Sci-Fi, Reviews

Thanks for this review. Though Wow. Karen's got it going on! I'll add the book to my list, I'm always leery of book 2 of a trilogy. I don't think I can name five that I've read in the last few years that seemed as powerful as the first book. Granted, some of this has to do with publication. You work for years honing the first and then the second one is demanded the following year.

Okay, those first sentences should read: "Thanks for this review. Wow. Karen's got it going on! Though I'll add the book to my list, I'm always leery of book 2 of a trilogy."

☺ Got the gist.
This is not always easy reading - but it's worth it.