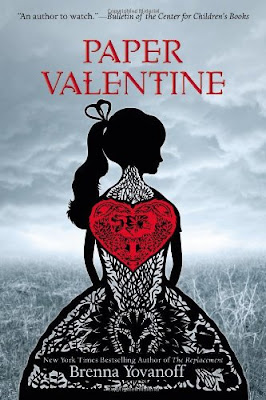 Reader Gut Reaction: This is the first Brenna Yovanoff book I've read. I meant to read The Replacement, but hadn't yet. And then this one caught my eye on the library shelves: a murder mystery, an unexpected love story…and a ghost or three. I've been gravitating toward books with ghosts and supernatural powers because of my own projects (and my curiosity about how other authors write such things), but throw in that suspense element and I'm hooked.

This book definitely did hook me, from start to finish. In the first chapter, we learn that there's been an unsolved murder of a teen girl, and we learn that Hannah, the narrator, is being haunted by the ghost of her best friend. And of course you'd expect a ghost to be somewhat morbid, but Lillian seems inordinately interested in the mysterious death. Not because her own death was a mystery; she died of anorexia. But perhaps it's that she's scared for Hannah and her younger sister Ariel, and clinging to life so she can make something right.

Concerning Character: The narrator, Hannah, is almost never without the ghost of Lillian, even though she admits she's not the kind of person who gets haunted by anything. But Lillian seems caught, unable to leave, and Hannah has to deal with it. She's a capable and strong protagonist, and I like that a lot; she's got a lot of responsibilities, but she has the personality to shoulder them—watching out for her sister, helping her cousin Kelly at her photography shop over the summer. It's just that when it comes to taking care of herself that she's a little less careful.

For better or for worse, though, she has Lillian's ghost, who is a wonderful combination of creepy and sympathetic, and she has a good family with a great stepdad, and she has Finny Boone, a delinquent with a heart of gold who ends up surprising her with his capacity for kindness and friendship. But she also has this murder mystery that seems to be drawing her in whether she likes it or not, and that keeps the reader on edge wondering whether someone in her life would have the capacity to kill. The author does a good job of keeping us on our toes, never quite being able to trust anyone…

Recommended for Fans Of...: Anya's Ghost (reviewed here) or Friends With Boys (reviewed here)--both stories about figuring out how to fit in, especially when you've got a ghost bugging you. Even more strongly recommended for fans of suspenseful murder mysteries with just a touch of the supernatural, like Lois Duncan's books.

Themes & Things: Though Lillian died from anorexia, this is far from being a problem novel—rather, it's much more about grief and about secrets, about learning who you are and who others are despite the fact that we all keep our secret hearts hidden to some extent. It's also about the strong bonds of love and family and friendship, and the terrible things that can happen when you don't have those bonds to save you, to hold close to your heart.

Cover Chatter: The paper-cutout girl and heart is just really, really cool—fitting for the plot of the story, but also unusual and eye-catchingly creepy with its stark red and black silhouette.

You can find Paper Valentine by Brenna Yovanoff online, or at an independent bookstore near you!
Posted by Sarah Stevenson at 2:37 PM
Labels: AF, Fantasy/Sci-Fi, Mystery, Reviews, Sisters, Suspense

I'll try this, because I am a fan of Anya's Ghost and Friends With Boys. Thanks for the recommendation.

This one's not a graphic novel, but it does have a similar setup to those, with the ghost, and the idea of your own past haunting you. Let me know what you think when you read it!