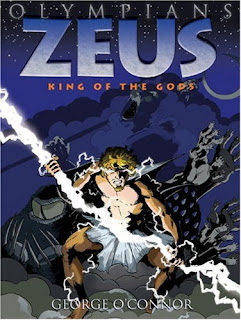 Greek myths. Some of the oldest tales on Earth, yet they just don't "get old." As proven by our constant reinterpretations of them, all the way to the currently-popular Percy Jackson and the Olympians series, we've got a fascination for the way the ancient Greeks interpreted the world's creation and the mighty beings that imbue it with life, wisdom, power, and vengeance.

The first book in a new Olympians series by George O'Connor for First Second, Zeus: King of the Gods is a fun and informative introduction to the mythology of the Greek pantheon, and is well-suited both for parents to read with/to their children as well as for older children and middle-grade readers to explore on their own. And, if you're a mythology fan like me, you'll just re-read it until it falls apart and you're old. You should see my copy of D'Aulaire's Book of Greek Myths—which is also one of the recommended books for further reading that the author lists at the end of the book.

It is, in fact, the extras that really made this volume for me. Discussion questions, factoids, explanations of some of the decisions the author made in his retelling, further reading, and trading-card-style spreads enabling us to get to know some of the significant characters in this chapter of the story and their modern-day legacy. The story itself is simply and clearly shown, with some clear fun had by the author in drawing the exciting titan-clashing fight scenes. And while a few minor liberties are taken in the retelling, the author explains his choices and encourages readers to explore the original stories on their own. A series with a lot of potential for home and classroom enjoyment, IMHO. Says the mythology enthusiast...

Buy Zeus: King of the Gods from an independent bookstore near you!
Posted by Sarah Stevenson at 3:08 PM
Labels: AF, Fantasy/Sci-Fi, Graphic Novels, Mythology, Reviews

I enjoyed the Zeus book, I'm really looking forward to the stories about Hera and Hestia. I hope that Hera will be portrayed in a balanced light, and Hestia will have some interesting things brought to general knowledge.

I hope so, too! The Zeus book seemed well-researched, so I'm optimistic. :)

I only had a chance to read the first few pages and flip through, but it's been circulating briskly ever since - I'm looking forward to getting more.