Random Reads: The Mysterious Doings of Springer and Stead 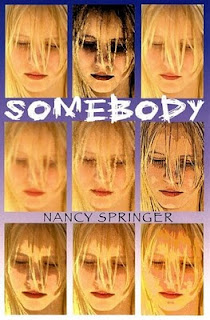 Somebody by Nancy Springer is a lightning-quick, fast-paced read that should appeal to fans of suspense authors like Caroline Cooney. The narrator is a fifteen-year-old girl named Patty. Or is she fourteen? She isn't sure quite how old she is—but what she DOES know is her real name isn't Patty, it's Sherica. But if she tells anyone, her dad and older brother will be livid.

Who is Sherica?...besides an overweight, unhappy girl whose family never stays in one place long enough for her to have real friends, that is. She isn't sure who she really is, but eventually she can't stand not knowing anymore. With the help of possibly her first true friend, she embarks on a journey into the unknown and the dimly-remembered that threatens the dubious stability of her current life, not to mention her relationship with the only family she's really ever known.

Rightly, this book is an ALA Quick Pick for Reluctant YA Readers, and it fits that category well. As the type of reader who likes to delve a bit into my stories and characters, I could happily have read the story if it had been twice as long. But Springer (a two-time Edgar winner) packs a lot into these pages.

Buy Somebody from an independent bookstore near you! 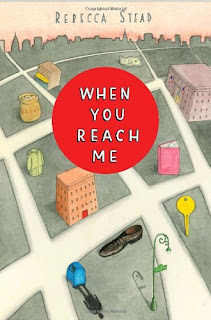 Rebecca Stead's When You Reach Me, in addition to winning a great deal of praise, seems to have sparked a little controversy to boot—specifically with respect to who the intended audience is and whether it might appeal more to older readers' sense of nostalgia than to the teen readers it's marketed to. Personally, I was but a tot in 1979, so I fall somewhere in between, I guess.

I'm not going to address that argument in detail, but from my perspective, this is definitely a crossover book—yes, the late-1970s setting is going to tug on the memories of those old enough to have experienced that time period, not to mention appealing to those with a 70s fetish. But beyond that, it's a moody, complex, clever and tightly-written story with intriguing developments that, dare I say, are age-independent. It starts as a tale of friendship and family woes of the sort that transcend the details of time and place—though of course those critical details lend it solidity and uniqueness. But it's the story's twist—and I can't tell you what that is lest I risk spoilers—that make the narrator's ordinary life extraordinary and surprising. "Things are not what they seem" doesn't even begin to cover it. I'd venture to call this magical realism. I don't think that would be a stretch.

I guess all I can say is, if you liked Stead's earlier novel First Light, don't miss this one.

Buy When You Reach Me from an independent bookstore near you!
Posted by Sarah Stevenson at 12:21 PM
Labels: AF, Magical Realism, Reviews, Suspense