It's going to be a graphic novel extravaganza around here for a while, as I not only work through posting reviews of the fabulous Cybils finalists, but also work through a small pile of graphic novels that have been sent to me for review and are waiting eagerly to be read. Can I complain? Nope. I would, however, like to note where I obtained the following titles: sources include Stanislaus County Library and review copies sent by publishers for Cybils judging--thank you to Archaia Press and IDW Publishing. Anyway, read on for some of my thoughts and reactions during the judging period. 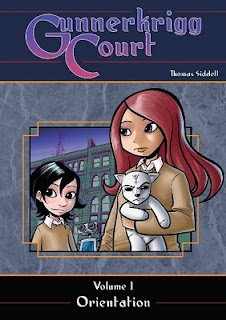 First, the Cybils winner! Congratulations to Gunnerkrigg Court: Orientation, which is the novelization of a serial webcomic by Tom Siddell. In fact, it's book one of a series, one that fans of fantasy "school stories" (like, well, the big HP) are sure to enjoy. It's surreal and mysterious, peppered with odd critters, magical and mechanical constructs, and intriguingly-utilized mythological elements. The friendships, however, are appealing and realistic, as we see main character Antimony settle into her new life at the odd Gunnerkrigg school.

It's a good story with a consistent pace, nicely conveyed through the graphic storytelling using a brief chapter format. At the end of each chapter is a little one-page "extra" mini-story; these are cute and fun, though I didn't feel they added a lot to the main story. In terms of visual style, I loved the diversity of characters and, particularly, the fantastical elements and overall atmosphere. The main character could have been a bit more visually expressive, though I know it's part of Antimony's personality to be a bit reserved and keep to herself. Overall, I'm left intrigued and wanting to read more--I guess I'll have to read the sequel to find out how they develop and figure out the real story behind this strange magical school across from a dangerous wood, watched over by creepy mechanical birds... 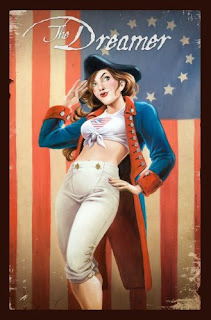 The Dreamer: The Consequence of Nathan Hale, Pt. 1, by Lora Innes, seemed to inspire a lot of differing opinions in the judging panel. I, for one, thought it was a worthy candidate, despite a few minor complaints. I'm not so sure about the cover artwork, for one thing...but the story inside is told in a very classic comic style (reminiscent--for me, at least--of DC/Vertigo titles of the '90s). It works well for this story, which has a contemporary storyline as well as one which takes place in America's past. Modern-day high school student Beatrice starts visiting a handsome Revolutionary soldier in her dreams...dreams that seem all too real.

It's nicely done, though a few of the soldier characters were hard to tell apart. I think the blending of past and present is appealing, as well as the blending of genres: is it historical-romance-fantasy-adventure? The historical details are well-utilized, despite a few anachronistic elements that bugged me a little, and it's got a great set of characters (and the possibility for interracial romance between Bea and a school friend, though poor Mr. Smarty Pants Teenager Guy doesn't really stand a chance against Sexy Soldier Boy). This one's also a serial, as I was somewhat abruptly reminded at the end of this volume when I was LEFT HANGING, darn it.

With this one, it's hard to know if the romance elements are going to irritate guy readers, but I think it's got potential for both male and female reading audiences.
Posted by Sarah Stevenson at 12:11 PM
Labels: AF, Fantasy/Sci-Fi, Graphic Novels, Historical Fiction, Magical Realism, Reviews

That's the ONLY thing I hate about serialized graphics -- being left hanging. The cover of The Dreamer is definitely ... interesting - but I'll take your word for it that the story inside has substance.