As with the previous installment of Cybils YA graphic novel reviews, sources include Stanislaus County Library and review copies sent by publishers for Cybils judging. Today I'm looking at two modern interpretations of classic tales--or sets of tales. 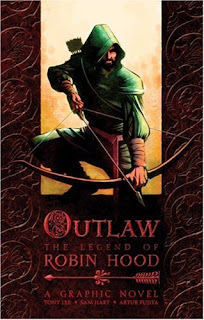 Who doesn't like the tale of Robin Hood? Well, probably a few people, but they can go away and leave the rest of us to read Outlaw: The Legend of Robin Hood by Tony Lee, Sam Hart, and Artur Fujita. This take on the classic story was full of intrigue and snappy dialogue, as well as a wealth of moody, grim atmosphere, historical detail, and as much moxie as possible (given the context) for Maid Marian. Despite some anachronistic dialogue (yeah, I'm picky about that), it was well-written, and gave a lot of depth to the legendary Robin Hood character.

Little extra thing that I liked: The historical/literary information at the end was a very nice and informative touch. Thing that bugged me: Though the atmosphere created through the use of color and shadow was excellent, and the overall layout was fine, I had trouble telling the difference between characters in a lot of scenes. In general, though, this is a pretty strong retelling that looks at the story from a slightly different angle than readers are probably used to seeing in mass-produced versions of the tale. 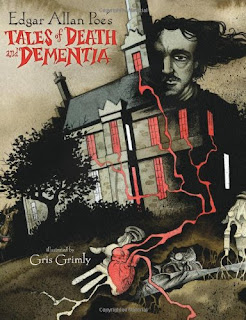 It's also easy to see how Edgar Allan Poe's Tales of Death and Dementia by Edgar Allan Poe and Gris Grimly would make a finalist list for YA graphic novels. Poe's appeal is pretty universal, except for those who completely avoid mystery, horror, or gore. And this set of tales is certainly disturbing and gory. A little over the top, in fact--which in some respects is perfect.

In my opinion, this would make a great volume (or series, I guess) to introduce readers to Poe. The choice of tales seemed a little odd to me in some cases, with a few obscure ones making an appearance, and the abridging of the stories was not always done as smoothly as it could have been. For the most part, though, the abridging was unobtrusive. I did enjoy how the illustrations were laid out and how the book designers gave this more of a graphic-novel feel than simply being an illustrated book. I had mixed feelings about the drawing style, however. There were times when I felt it was absolutely fitting, and others when I didn't like how characters were interpreted, or when the drawing style seemed to be less cohesive. At those times, the atmosphere and mood still came across but, for me anyway, the clarity of storytelling was sacrificed. Still, I love the idea of turning Poe into a graphic novel, and this is an intriguing way of tackling that idea.
Posted by Sarah Stevenson at 4:12 PM
Labels: Adventure, AF, Classics, Cybils, Graphic Novels, Guy Appeal, Reviews, Suspense

First, I am just LOVING that Poe cover. Loving. It. The Robin Hood is evocative as well. I love that the legends keep being remade, by people from all over the place.

I will have to find the Robin Hood. Because really, who DOESN'T like Robin Hood?

And I'm pleased to say I nominated the Poe - didn't Gris Grimly do great work there?