If Nina Khan were to rate herself on the unofficial Pakistani prestige point system – the one she’s sure all the aunties and uncles use to determine the most attractive marriage prospects for their children – her scoring might go something like this:

+2 points for getting excellent grades
–3 points for failing to live up to expectations set by genius older sister
+4 points for dutifully obeying parents and never, ever going to parties, no matter how antisocial that makes her seem to everyone at Deer Hook High
–1 point for harboring secret jealousy of her best friends, who are allowed to date like normal teenagers
+2 points for never drinking an alcoholic beverage
–10 points for obsessing about Asher Richelli, who talks to Nina like she’s not a freak at all, even though he knows that she has a disturbing line of hair running down her back. 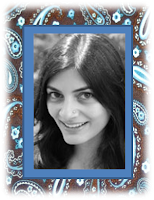 In our review of Sheba Karim's debut YA novel Skunk Girl, we wrote: "[T]here really isn't much (if any) teen literature out there that deals with the quirks of growing up as a Pakistani girl in America, with Muslim parents who are conservative, even restrictive in some ways, but still close and loving." As a portrayal of the general angst of growing up, the book was equally spot-on, and we were eager to ask the author about her writing process, her favorite reads, and her thoughts on the role of religion and culture in the story of Skunk Girl's main character, Nina.

We had limited time to spend with this busy New York born author, as she is in the process of recovering from an international move. We appreciate the time she took away from her boxes and bags to speak to us!

Finding Wonderland: Many of our readers are writers. Can you talk a bit about your process? What was the original first line of Skunk Girl? Did it change, or stay the same? What are your revisions like? Do you do flowcharts, outlines, or a flurry of Post-It notes?

Sheba Karim: The first line of Skunk Girl remained unchanged. In terms of writing process, I tend to think of structure first, and outline a chapter before I write it, at least the major plot points. It's very hard for me to start writing without having an idea of the direction I'm heading. My revisions for the book were across the board—some chapters I barely changed, while I rewrote the second half of the book entirely.

FW: As a follow up: From your blog we learn you were previously a lawyer before becoming a writer, and you received your MFA from the Iowa Writers Workshop, and did a residency at Hedgebrook. How did your family feel about your decision to move from something solid like law, to something chancy like writing? Do you feel that having an MFA made a difference to you as a writer?

SK: I think it was easier for me to switch career tracks because I applied to MFA programs, so rather than quitting my job and heading into some great creative unknown, I was simply transitioning into graduate school, and the fact that I was fully funded helped a lot. My parents still worry about me, as parents are wont to do. It's hard to make a career as a writer, and there's a lot to be said for a stable paycheck, but I haven't once looked back.

SK: My absolute favorite book when I was very young was Are You My Mother? followed some years later by the complete Sherlock Holmes and, later, Jane Eyre. I love Margaret Atwood, and two of my all-time favorite books are A Fine Balance and Midnight's Children. In terms of multi-cultural YA writers, I've heard good things about Meja Mwangi, Sharon Flake, and Neesha Meminger.

FW: Neesha is one of our favorites, too!

What was your family's response to Skunk Girl? Knowing that you are a woman with a Muslim background, and that you're familiar with the religion, what was it like to write about Muslim religion from an outsider perspective? Did you feel any pressure to present a particular picture of Islam, or did you simply write what you know?

SK: I didn't feel any pressure to convey a particular picture of Islam, though obviously I didn’t want to demonize it in any way. In my mind, I was writing a novel about one particular Muslim girl’s experience, which would undoubtedly have similarities and differences to the experiences of other Muslim-American girls. My focus was on discussing certain aspects of growing up female and Muslim in the US (as it pertained to Nina) rather than conveying some broader message about the religion itself, though I did try to convey that, like most religions, there's a fluidity to Islam in terms of people’s beliefs and practices.

FW: The choice Nina makes about her relationship with Asher at the end of the book might not be one that every reader can relate to. Can you talk a bit about your decision to end the book with her choosing to stay closer to the dictates of her culture and family than "following her heart," so to speak (something very much lauded in mainstream American culture)? What do you think the ending conveys to readers of Pakistani or Muslim background? To non-Pakistani or non-Muslim readers?

SK: I think the decision Nina makes is more of a practical one. Some readers would have probably preferred that Nina be determined to pursue a relationship with Asher no matter what the cost. I think it's a lot easier to do such things when you're older and more independent. I'm not saying it's not possible, I'm just saying it’s a lot more difficult.

Some Muslim readers might be taken aback at the fact that Nina never questions the morality of dating, while some non-Muslim readers might be upset that Nina seemingly panders to cultural mores by deciding not to date Asher. But I don't want readers to come away thinking Nina's decision is meant to convey some kind of message, because it's not. It's just one character's individual decision in a complicated situation. For Nina, it's more of a timing thing. Of course, who knows, when school starts again, Nina's resolve might not be so strong.

Bonus Question: Will you continue writing in the YA genre? Can you talk a bit about what you're working on now?

SK: I'm currently working on a historical fiction novel set in 13th century Delhi, India, and I just started working on a YA fantasy book. It's quite new, so I won't say much about it, except that it involves djinns.

FW:Thank you so much again for taking time out of your busy schedule for us! We can't wait to read more of your work, and wish you the very best.

Gotta love the djinns, huh? And we're always HEARTILY in favor of multicultural fantasy here at Wonderland, so GO, SHEBA KARIM! If you want to read another fun, quirky interview, check out Sheba's toe-to-toe chat with the Longstockings (Yum, chocolate peanut butter ice cream!), or check out her author essay at Powells.com. Some good reading on women and identity in Islam, which is what Skunk Girl is about in a smaller, less academic fashion. 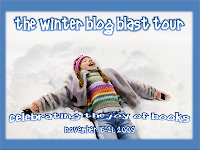 Good luck with your works-in-progress! I really enjoyed Skunk Girl. Bring on the djinns!

Good questions! I haven't read this book yet, and I now know I must. Thanks for the interview!

Skunkgirl got my Cybils nod for YA fiction.

Some of my favorite scenes were Nina hanging with her friends at lunch. I loved the natural unforced diversity of Nina's friends.

Now I have a new author to google -Meja Mwangi

Love this. And the upcoming YA fantasy book sounds gooooood!

I really want to read Skunk Girl!!! This is a great interview. :o) Thank you.