First, may I just note that I wrote up this review well before the delivery of thirteen Cybils books to my home this morning...!

It's Wicked Cool Overlooked Books Day, the first Monday of the month where some in the blogosphere pull out a particular book that's come to their attention in the previous month that they'd never heard of before. These are books are serendipitous grabs from the library, usually accompanied by the sounds of, "Huh!" as I look at the title and author.

Today I wanted to take a moment and ponder the brilliance of Phillip Pullman. I'd never read any of his non-series YA books, nor any of his plays, picture books, middle grade chapter books or ANYTHING but the His Dark Materials series, and the Sally Lockhart books. I don't quite know why I thought that was all he'd ever written... but I did. Imagine my surprise when in my library perusals I discovered The Broken Bridge. 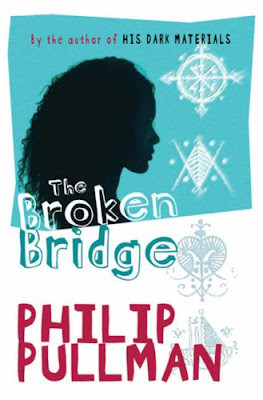 Ginny is sixteen, and happy living in Wales with her Da. She works, has a great group of friends, and though her Haitian artist mother died when she was a tiny baby, the artistic genes have passed to Ginny. Secure in the love of her absent-minded English father and her mother's legacy, she's feeling confident enough this summer to maybe take a chance on telling her best guy friend, and the only other person of color in their small Welsh village, how she feels about him.

A bewildering visit and a series of strange questions from a social worker, a passed on piece of gossip from her best girlfriend's older sister, and Ginny's summer cracks wide open. From knowing herself and her place in the universe, Ginny plunges abruptly into questioning everything -- herself and her father, and her newfound brother, who is ... English. White.

And Ginny's father doesn't want to talk about her half-brother's mother.

Nothing is reliable anymore when half-remembered wisps of things she thought were dreams are perhaps a real part of Ginny's history. Bewilderment, isolation, and suspicion push Ginny out of her safety zone and into the world to find out -- something. Not knowing who to trust, she must repair the broken bridges of her life in order to go on.

This is a really poignant book about mistakes, assumptions, what we keep from each other and what's really important -- those we love. Ginny could be any girl, biracial or not, and the Welsh town of the story's setting is, as Pullman admits, where he discovered some things about himself one summer. This is a really excellent read, published in 1990, and overlooked by me 'til now. Check it out.

You'll find Phillip Pullman's The Broken Bridge at a library or an independent bookstore near you!
Posted by tanita✿davis at 6:06 AM
Labels: Ethnicity and YA Literature, Realistic Fiction, Reviews, Wicked Cool Overlooked Books

Sounds like a good one! I'll look for it.

I really liked this one--I read it when I was writing The Other Olwen and was surprised by how different it was from the other books I'd read by him.

Like you I have read Pullman and loved his YA books. I have always wished he would write more in the genre. I will definitely have to get this one. Thanks