A Mystery Wrapped in an Enigma: Jellicoe Road by Melina Marchetta 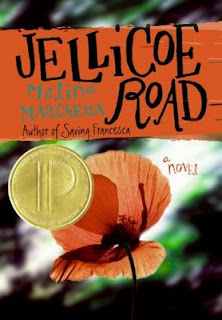 This title was a 2008 Cybils YA Finalist.

Books that can be classified as magical realism—and I’d call Jellicoe Road an example of that—aren’t necessarily for everyone. There’s mysteriousness, not necessarily explained away. Things happen that may seem destined; or they may seem entirely random. The sense of taut mystery, but of needing to know the answers, that pervades Melina Marchetta’s latest novel is something that will keep the reader going despite the occasional moment of seeming arbitrariness and the feeling of constant enigma.

Taylor Markham doesn’t know why her mother abandoned her by the side of the Jellicoe Road six years ago, but now, at age seventeen, she’s been going to the Jellicoe boarding school, her only mentor the rather odd caretaker/housemother type person, Hannah. But Hannah has disappeared, just when Taylor is confronted with a number of converging situations that all somehow relate. She’s become her house leader, for one thing, dealing with the politics of the other house leaders and the needs of her own charges; for another, Jonah Griggs, an estranged friend who attends the area military school, has come back into the area on the school’s annual outdoor expedition. And that means that a traditional years-old territorial battle between the Jellicoe Kids, the Cadets, and the Townies is about to begin again. Nobody knows the real origins of the conflict, but elements of their mock battle are echoed in a manuscript of Hannah’s that Taylor has read bits and pieces of, and this interplay between the written and the real constantly has the reader on edge.

Slowly, strangely, the strategizing and confrontations draw key parties together—Taylor, her friend Raffaela, Jonah, the Townie kid Santangelo—and illuminate the parallels between their story and Hannah’s sad tale, a tale of five friends who once created a game of territorial wars…and who were torn apart by the inevitable harshness of life. A strange, gripping, and dreamlike journey.

Buy Jellicoe Road from an independent bookstore near you!

lobve the cover - so colorful and bright. great review

I love the cover, too. This book has gotten so much attention it'll be interesting to read it. Your review gives hints to what must be a sprawling and huge narrative. Can't wait.