Complicated Love: I Know It's Over by C.K. Kelly Martin 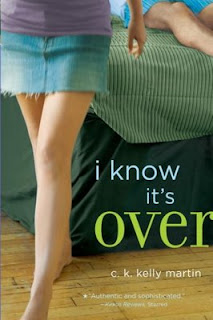 This book was a 2008 Cybils YA Finalist.

C.K. Kelly Martin’s debut novel I Know It’s Over really feels like two stories in one. First, there’s the story of Nick and Sasha’s whirlwind summer relationship, two seemingly opposite personalities who don’t mingle at school but have undeniable chemistry outside of it. Sasha is a classic “good girl” with protective parents; Nick is one of the popular guys, well-liked but with a little of the attitude that goes along with that. They don’t see eye to eye on everything, but their relationship moves quickly enough.

Of course, sex complicates things. Sasha breaks up with Nick, and while he’s still recovering from that bit of news, she shows up on his doorstep during Christmas break to let him know that she’s pregnant. That’s where the second story starts—there’s Before, and then there’s After. Now Sasha’s pregnant, and neither of them is sure what to do. To make things more complicated, Nick’s divorced parents are not the most approachable individuals in the world, and his friends all have very different takes on the situation. On top of it all, Nick still cares about Sasha, and isn’t sure she feels the same way in return.

Fully-rounded, sympathetic characters and a very believably depicted, confused narrator with a convincing voice make this one difficult to put down--especially during the second half, when the tension really picks up and we see the effect on Nick of having a pregnant ex-girlfriend whom he still loves. The side characters are also well-rounded, and add depth to this complex and sensitively drawn story, making it much more than just another book about teen pregnancy. Most of all, though, I was struck by how well the author captured the "sound" of the narrator’s voice—Martin has created an authentic character in Nick, and readers will want to follow his story to the end.

Buy I Know It's Over from an independent bookstore near you!
Posted by Sarah Stevenson at 12:51 PM
Labels: AF, Cybils, Guy Appeal, Realistic Fiction, Reviews

very interesting sounding! thanks for the heads up.

Thanks for letting us know about this book. I'm off to place a hold on it...

This blog has been nominated for the "I Love Your Blog" award! Great job on your blog!