Mystery with a Message 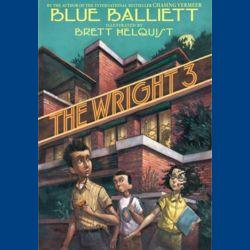 Blue Balliett’s unique mystery Chasing Vermeer received a Book Sense Book of the Year Award, an Edgar Award, an Agatha Award, and a host of other honors. Her newest book, The Wright 3, is the sequel, and will no doubt garner some acclaim of its own.

In many ways it has much of the appeal of the first book: wonderful illustrations by Brett Helquist, codes to decipher, a mystery to solve, and the added bonus of saving a piece of valuable art. However, this time Petra and Calder are joined by a third wheel of sorts: Tommy Segovia, Calder’s best friend from before Petra moved into Chicago’s Hyde Park neighborhood. Tommy had to move away for a year, but now that he and his mother have moved back, things aren’t quite the same as they used to be. Calder has this new friend—Petra—and the situation bugs Tommy.

Meanwhile, their sixth-grade class is studying the Frank Lloyd Wright building that’s in the neighborhood, the Robie House. It’s slated to be divided into pieces and the pieces sent to different museums, but the class and their teacher feel that would be destroying a masterpiece whose magnificence depends upon how it fits together as a whole: architecture, art-glass windows, and all. And then, there have been reports of strange disturbances at the Robie House: windows opening and closing, strange lights and shadows and winds, constructions workers having unfortunate accidents. Can Petra, Calder, and Tommy learn to get along well enough for the Wright 3—as they call themselves—to figure out how to save the Robie House?

It’s another fascinating mystery in which there are no coincidences; in which every pattern has a meaning if only you’re receptive to figuring it out. My only complaint is that character development is sacrificed a bit in favor of the mystery-solving process. This is unfortunate, because the characters are all mixed-race kids who just are what they are (a conversation we keep bringing up here and on Finding Wonderland. Tommy is half-Colombian, half-English; Petra is part North African, Dutch, and Middle-Eastern; and Calder is half-Indian and half-Canadian. I love that about the characters, which is why I wish their mixed-up, all-American, melting-pot-salad-bowl-ness played a slightly larger role. But then, I suppose giving it a bigger part would make it an issue as opposed to just a trait among other traits. And the book absolutely holds its own as a mystery without that added complication.

And, if you find yourself in Chicago, you can visit the real-life Robie House and take the Wright 3 tour. Fun!
Posted by Sarah Stevenson at 7:04 PM
Labels: AF, Reviews