Half and Half Hapa

This book is a 2006 Cybil Award Nominee for YA Fiction.

Who are you if you feel like you're in nobody's group, when even the stereotypes don't fit you? Patty Ho, in Nothing but the Truth (and a few white lies) isn't entirely sure where she fits in this world. She doesn't think she's got much going on -- after all, there's a white guy at her school who hates her, her strict mother, a woman of tradition, is positive 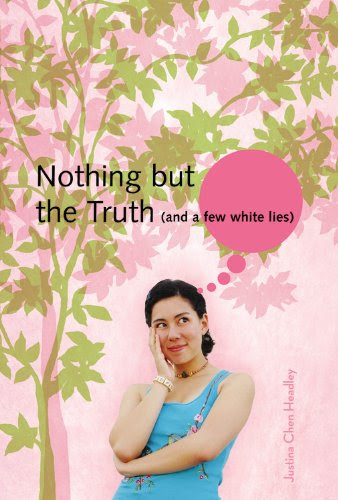 that her mantra of Good Grades, Good Job, and a 'Good One,' (which means a Taiwanese man) is the only thing that will save her brainless girlchild. Always ready to lecture and to compare Patty unfavorably with the children of other Asian families they know, Patty's mom seems to think she's a willful, worthless, terrible daughter, unlike her precious and perfect - and more traditionally Asian looking - brother, Abe, who has capture the Gold and is going to Harvard. At their neighborhood gossip potlucks, Patty's "China Doll" friends think she's not quite Asian enough because she's a hapa, and has a Caucasian father, who is long gone.

Patty despairs of ever fitting into her own world, and she resents being left with the Taiwanese half. She wishes she could find her father. She wonders if her hair were black instead of brown, her mother would think more of her...

Patty's not a "banana" -- Asian looking but Caucasian acting -- nor is she an Egg - White skinned with a "yellow" center. While those stereotypes don't necessarily fit anyone well, they fit Patty even worse. Adrift, it takes the women of the Kung Fu Kick Ass Club she meets at the Stanford Math Camp, and finding out the truth about her mother to show her the truth about herself and her own worth. Given the gift of anger and clarity in seeing herself as beautiful and cool AND Taiwanese -Caucasian --- and worth fighting for, Patty stops kowtow-ing and starts kicking butt -- in a bitterly funny, tear-jerking, raise-your-fist-and-cheer YA novel about race and relationships and reality by Justina Chen Headley. You'll want to check this one out, and the upcoming novels on Chen Headley's webpage. I only hope someday to write something half as good and real.
Posted by tanita✿davis at 10:51 AM
Labels: Reviews

Wow, sounds great! (Finally, one of those mixed-race novels we were talking about...)

I have already passed this on to Mei Mei as a must-read; it really reminds me of Imperfectly Toasted and now I think reading this type of thing in YA lit frees writers to really embrace all of the complex feelings -- and the anger too -- and really write realistically. It's amazing.