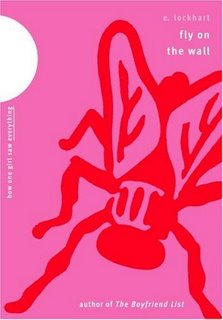 "...lust? It's like an urge that disregards all the stuff that your brain knows you actually think."

Gretchen Yee's life feels out of control. Her Dad's dumping her Mom for someone else, her best friend is freezing her out, she can't even talk around the guy she likes -- or talk at ALL around the boy who made out with her and dumped her unceremoniously practically days later. Her world is zooming into the smash zone, and she wishes, just once, that she could be Fly on the Wall on the wall of the boy's locker room. So many of the mysteries of life then would be revealed.
What IS it with guys, with men? How can they be so awful? And why is her Dad smelling like smoke? How could he cheat on her Mom with some smoker?

A Tiny Spoiler: Gretchen DOES become a fly, and yeah, she finds out a lot. Mostly that (ahem) gherkins are just... flesh. And boys are... people: Scrawny, buffed, unhappy, insecure people. Even when they're loud and macho or zit-scarred or well endowed, Gretchen realizes that they're human.

Further, Gretchen learns that she is human too: prone to judgmental thoughts and jumping to conclusions, prone to not really listening or hearing or noticing anyone but herself. She finds out that girls are a lot like guys -- full of hormones and urges and with the inate ability to reach out and give life a push when it stalls -- just like boys can. Instead of hiding behind the comic strip characters in her art, Gretchen learns that she can step out of the frame and be a super flygirl herself.

There aren't too many books where I'm both giggling and briefly grossed out and close to tears all at once. E. Lockhart has really nailed it, and I can't wait to read the rest of her stuff.
Posted by tanita✿davis at 2:04 PM
Labels: Reviews

I really loved Fly On The Wall too. It's the first time I've ever wanted to re-read a book again, besides another book by Meg Cabot.