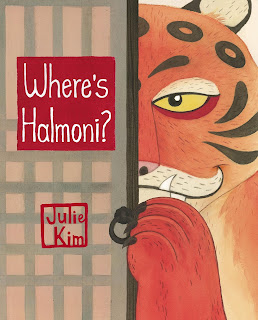 Synopsis: Uh-oh, Grandma's gone missing…. In this year's Cybils winner for Elementary/Middle Grade Graphic Novels, Where's Halmoni? by Julie Kim, Noona and her little brother Joon decide to visit their Halmoni (Grandma in Korean) only to find that she's mysteriously disappeared. Following a set of animal tracks on the floor, they climb through an odd new window and discover a magical forest world peopled with characters from Korean folklore, such as dokkebi (not-so-scary goblins) and various clever and/or greedy animals that help and/or hinder their quest to find Halmoni.

In the process, the kids themselves learn more about Korean culture and language; in fact, some of the creatures they meet speak Korean, and we, like the kid protagonists, have enough context to figure out SOME of it—but never fear; you'll find a really cool visual glossary in the back of the book. It was like a fun little quest of its own to find the corresponding image and Hangul text in the glossary.

Observations: This was an intriguing adventure with lots of action, relatable kid protagonists, and plenty of humor. The characters from Korean folktales, which are explained in the back of the book, make this one feel both traditional and new. For readers unfamiliar with Korean culture, it's a friendly, welcoming opportunity to learn a few new tidbits and also see the similarities between kids across the world. (The little boy's candy stash in his backpack and the epic Rock-Paper-Scissors battle in particular made me smile.) 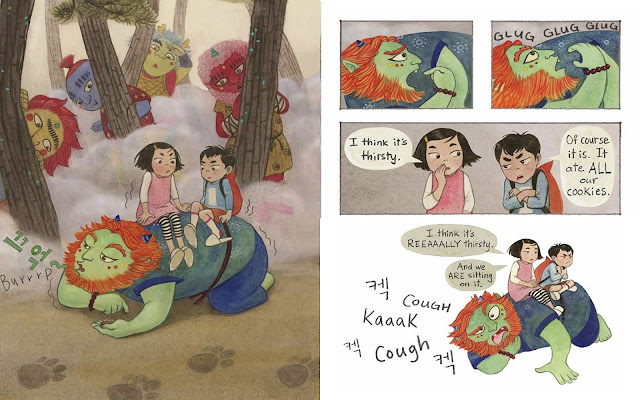 The images are beautiful, tactile, and present a sort of cross between traditional picture books and graphic novels. Korea, of course, has a strong comics tradition of its own, and this is also a clear influence on the art. The story is simple and in many ways universal, with a folk tale structure, and the author does well in conveying meaning whether in English, Korean, or purely visual form.

Conclusion: Very charming and with many re-read possibilities. It kind of felt like a Korean interpretation of Where the Wild Things Are.

I received my copy of this book courtesy of my library. You can find WHERE'S HALMONI? by Julie Kim at an online e-tailer, or at a real life, independent bookstore near you!
Posted by Sarah Stevenson at 3:49 PM
Labels: Adventure, AF, Cybils, Graphic Novels, Reviews

@AF: EVERY TIME I read this title I think "halloumi," and I'm hungry. But, this little green guy is so cute.