Some of the most popular library titles are those with the "ripped from the headlines" topical premise. Remember rainbow parties? And then the book that followed the Oprah-based rumor? There are always authors who use trending news stories as a springboard for a dramatic work of realistic fiction. This novel is no exception. Like many of the "ripped from the headlines" books, this novel takes a fact which affects a minority, and then exaggerates it into something scary and immediate for the majority. I admit, I do not love this kind of thing, but I also am quite clear that I am not the audience.

Many readers LOVE these sensational books about dangers other teens have gotten into. Frankly, many adults would prefer that teens learn about the world through this painless fictional medium rather than having something awful like this happen to them in real life. Fair enough, that makes sense. So, from the annals of "Kids, Don't Let This Crazy Happen To You" comes a story of terrorizing cyberbullying, screen-capping, cybersmashing, child pornography, child molestation, arson, violent assault, blackmail... yeah. This is heart-poundingly dramatic, with a touch of "Criminal Minds" and a sprinkling near the end of "Enemy of the State" which will seem current and terrifying to some readers. Others will come away with an intense desire to put a sticky note over the camera on their laptops and disable their ChatRoulette and Snapchat and vow to get offline for awhile.

Summary: The story opens with Miranda online, having hacked into someone's digital feed to see a video he's got streaming. It's of a boy - and a man - and at first she doesn't watch, but then she does, to bear witness. It's a "trailer" of sorts, offering more, for the discerning buyer. Miranda can see it's the work of The Creep, as she calls the creeper who took control of the camera in her laptop and with blackmail and threats efficiently ruined her life, and the lives of her parents when she was thirteen. Miranda has not just got suicidal thoughts, she's tried to kill herself repeatedly. She has one more chance to shut down The Creep, once and for all -- but she needs help. She needs the boy in the video.

"John Boy" isn't his name, any more than "Miranda" is her name, but it's a persona Jesse's inhabited for a long time. It's easier to be someone else - someone far away from what touches his outsides, and what goes on in his day-to-day life. Jesse's life is a life of betrayal - a father who walks out with no word of explanation, an uncle who implies that he and his family now have a place to live, in return for what Jesse allows to happen between them -- so King, the terrifying cyberbully who has perpetuated and set up the final betrayal, on film, orders him to find a young "friend" for the cameras, Jesse is ready to do anything to change what will happen if he doesn't. He doesn't want his mother and sister to die - but it's that, or become a predator for another small boy, and put him through what Jesse himself has gone through. The choices are all bad. When he receives an old-style telephone in the mail, with the words "I can help" over a screencap of his face, he's terrified he's going to be exposed -- but he's also terrified, because a tiny, persistent hope that everything could change is born within him.

And hope is sometimes the most dangerous thing of all. 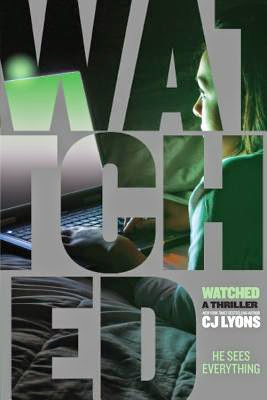 Peaks: This is a issue book, clearly, but the issue is hydra-headed. The "ripped from the headlines" topic gains traction from the recent iCloud leaks and malicious "doxing" of game designer Zoe Quinn. The idea here is to educate teens about where they leave their digital content, and who to trust in the faceless online world (READ: no one) and I can say it's successful as an educational tool of the "Scared Straight" variety, if not in terms of providing actual information and action steps. The writing is effective and the characters are compelling in their helplessness -- you desperately want to have someone come out of this able to stand tall and deal.

Though what's happened to both characters is truly horrible, and the wrenching situations aren't played entirely for emotional punch, the distant and almost terse way of relating the damage the two have suffered goes a long way toward confirming readers' belief in their solid narrative voices. With the novel viewing the elements of the story only through the eyes of terrified narrators, a myopic and claustrophobic viewpoint emerges, which the author used to her advantage. There's no one else who can act on their behalf, so the close-focus of the storyline allows the author the liberty of creating a solution out of the character's own heads, relying on themselves alone. The final scenes are fast-paced and disturbing, and the victory isn't entirely clean, despite the "we did it!" and insta-romance, there are legalities hanging over both of their heads. However, it's also all very dramatic, and will appeal to teens who love the drama. Because of the subject matter, this will play best with more mature readers.

Valleys: When the novel opens, it's a little unclear what's going on - someone is watching someone else, and it took me a bit to know if that person were bad or good. This may confuse many readers and leave them reaching for the next book. Things do straighten out by Ch. 3 and there's DEFINITE sides and clarity by then, but I think the novel might have benefited from beginning at that spot.

I mentioned the last-five-pages-of-the-book romance - I'm sorry, but someone who has been long-term molested may not be your best character to have a first kiss on a Jumbotron... in a room where recently one of them was held at gunpoint. I suppose that may have been seen as light relief, but it felt like a false step from the author.

Since the Potter books it has become more noticeable as a trope, but in YA lit, there have always been novels wherein adults are these pitiful and stupid creatures who must be protected at all costs, because love. I dunno - I found the claim that the authorities were disinterested because "bigger fish in the sea" and the adults unable or unwilling to act because the children had to protect them by not telling them the truth, because "How Much More Can They Take????" to be a bit dubious. I was gratified by the one angry moment of "I was not THAT good of an actor, you should have noticed." Yes, fictional parents. Being clueless is no longer good enough.

For all that this is an Issue book, written, the author said, after she was confronted with the story of Amanda Todd, there is less real-world information in the novel than I expected. It may be true that legal charges are hard to bring against "creepers" because of complicity by the blackmailed victims themselves, but I had a hard time with the idea that police and FBI are disinterested because there are bigger fish in the sea, etc. I wanted to see an example of kids using the system, and the system working for them - which is eventually what happened, but there was a lot of drama, pain and suffering beforehand. At any rate, the author's note at the end of the novel explains that there ARE ways to get away from and around digital predators, and gives detailed information on what to do.

And, I voice my ongoing quibble about lack of diversity, seeing as cyberbullying is an issue across class, ethnic, ability and size lines - in the novel, there's a lot going on, and as previously mentioned, the focus is myopic, but I still think it's worth adding diversity wherever possible.

Conclusion: While topically grim for me, this book will have mad appeal for its target audience of true crime lovers. If you know teens for whom the tagline "thrillers with heart" and "ripped from the headlines" would bring on happy shivers, teens who enjoy the work of Caroline B. Cooney, the wrenching Lurlene McDaniel,classic Lois Duncan or Joan Lowery Nixon - then you definitely know the audience for this novel.


I received my copy of this book courtesy of Sourcebooks. As of today, you can find WATCHED by CJ Lyons at an online e-tailer, or at a real life, independent bookstore near you!