I received this book courtesy of Full Fathom Five Digital and while normally I prefer digital books which have paper counterparts, I made an exception this time, for Reasons. FFF Digital is an imprint of Full Fathom Five, the content creation company founded in 2010 by best-selling author James Frey, so this should tell you something about the authors they work with - they're no slouches in the make-the-most-of-interesting-stuff department. I picked up this novel because a.) the name Euphemia, b.) EUPHEMIA!? and c.) "Spy Girl" in a title is a great hook.

Also, Euphemia. If that's your name, what other options present themselves in your life, outside of occupying a 19th century English white parasol movie, but to be a spy?

Cassandra Neyenesch lived in China and Taiwan and learned Mandarin, and did some really odd jobs... all of which were possibly preparation for writing a spy novel.

"Then there's the guy with the Rottweilers two doors down. The dogs always run to the end of their chains when you walk by, and they bark like they want to rip out your thorax and use it for a chew toy. Their owner is this huge muscly guy who always waves like Hey, I'm super friendly but he doesn't do anything to make his dogs less scary - at least he could shorten their chains. I started bribing them with Jiu Jiu's offal, sneaking it out of the house in a napkin. Pretty soon they were as tame as bunny rabbits - I call them Tweedledum and Tweedledee - and they let me look in the windows of the house. Now I know why the big guy has them: so no one can sneak up on him while he's in the middle of watching a Beyoncé video and copying her moves. Though the sight of an Arnold Schwarzenegger look-alike skipping around in a unitard and belting out the lyrics to "Single Ladies" is much better entertainment than anything on TV."

At times the voice is engaging, confiding, and amusing. There are loads of detail, ranging from the first impressions appearance of things to revelations and explanations to imaginative assumptions about the people the protagonist meets. From the first page, you dive head first into action, and, while you're not sure where you'll land, you're immediately entertained.

Now that her sister, Lillian, has gone off toe college in New York, Euphemia Fan is the only Chinese-American girl in back-of-beyond, Brackybogue, Long Island. It's a tiny, touristy town that looks like Main Street American, and the fact that she's just seen her elderly uncle commit MURDER while she was being nosy and trying to follow a guy she thought was following HER... is kind of a problem. For a number of reasons. 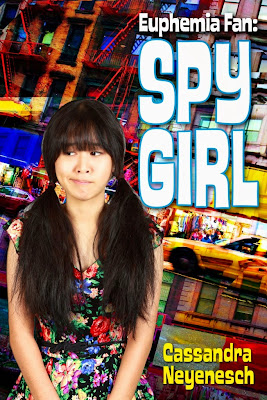 It seems like all she has to do is pull on one thread, and suddenly the whole cozy and safe blanket of warmth that made up her family and her history and her world unravels in big, messy threads. Tyler, the guy who's been following her, has information and warnings about her father that Pheemi doesn't want to hear -- nor does she really want to know how he got his information! Her suddenly distant and snobby sister, Lillian, doesn't believe her until it's almost too late, and by then, the bullets are flying, and all they can do is cling to one another as their lives implode. The only way out is to keep one step ahead of danger. Are Euphemia Fan, her co-spy Tyler, and her sister Lillian together smarter than a criminal? Well - they'll have to think fast to find out.

Peaks:It's clear that the author has been intimately involved in Asian communities and has experienced being an outsider looking in. The scenes of Pheemi landing in a busy, crowded Asian neighborhood in Flushing where she rarely or doesn't understands the roar of languages she hears and is just barely holding her own with people crowding her - priceless. There's so much to enjoy in this headlong rush through a week in the character's life - an incredibly busy, dangerous, intense week -- and the breathless action keeps readers plowing forward. I find this book to be a great homage to Harriet the Spy who also looked in windows and skulked around. Pheemia uses what she knows of her neighbors from her window-peeping to great advantage and for awhile, her observation of the character and temperament of the neighbors help keep trouble at bay.

While the plot ties up neatly, to my mind, there's room for another Euphemia adventure - it's certainly the colorful, cinematic type of thing which older middle graders and younger YA readers will enjoy.

Valleys: A diverting book with quick-paced narrative, it periodically suffers from an excess of plot instead of characterization. The characters are hard to "see" for me. Additionally, while I am glad to read a novel with an Asian protagonist, it was odd to read about Euphemia's description of her Chinese-American sister as having "tilted" eyes described as "black" - that felt like an oddly self-conscious and "othering" moment - especially since eyes aren't black. The moment and the description felt false from the point of view of a narrative of another Asian character.

It seemed odd to me that Euphemia didn't seem to have feelings about her name, no one wondered really why she had it - why her Chinese-American parents chose it -- and except for a comment by a neighbor, it's left unexplored. Since it's such an unusual name, that seems odd; I expected everyone she met to have a comment or a pause, but...nada. There is also a bit of telling what Pheemi is feeling and thinking instead of showing and allowing readers to experience her inner mind with her. Additionally, there are a few odd word choices (with disappearances and goons around, a fifteen year old describes herself as being "in a pickle?") that make Euphemia sound a little non-modern for a teen, but those are fairly minor.

There is a romance in the novel; this is not a spoiler, as the jacket describes Tyler as "swoon-worthy." It's ...definitely something the reader is told, not shown or felt; frankly there's so much going on in the breakneck pace of the action that there's not actually really time to fall in anything more than crush. The budding romance between Euphemia and Tyler has a soupçon of predictable inevitability in its execution - I was pretty gobamacked at some of the declarations in the end. A crush made sense, but something lasting longer than the danger I didn't at all expect - and left me with some pesky questions about Tyler I wouldn't have otherwise had.

Conclusion: A slightly uneven book but fun; a quick and entertaining read for a dull autumn afternoon.

I received my copy of this book courtesy of the publisher. After November 19th, you can find EUPEHMIA FAN: SPY GIRL by This Author at an online e-tailer, or at a real life, independent bookstore near you!