"Literally translated, the word apocalypse means “a revelation,” or “uncovering,” as in uncovering of the truth. (From the Greek: apo, meaning un, and calypto, meaning covering.) In fact, the title of the New Testament Doomsday guide, John of Patmos’ first century CE “Book of Revelation,” is Apokalypsis. In other words, through crisis, the End of Days reveals The Truth of the World while also revealing us to ourselves." ~ Robert Burke Warren

Why do people so love post-apocalyptic novels? Because they allow them to imagine their Real Selves, when all else is boiled away, striding through disaster and kicking its butt. Or, not, as the case may be. In Mike Mullins' ASHFALL, a supervolcano explodes and dust chokes the world. Susan Beth Pfeffer's classic LIFE AS WE KNEW IT depicts the moon nudged just a titch out of place, with tsunamis and floods and heat and disaster following. The elements are out of whack as well in this author's post-apocalyptic debut (also entitled THE RAIN in the UK) which falls a shade more on the side of fear-mongering than fact, but contains the scary-end-of-world post-apocalyptic scenario which is like catnip for some readers. Regardless of whether the facts line up, the adrenaline will be pumping in this tale, and True Selves will be revealed. 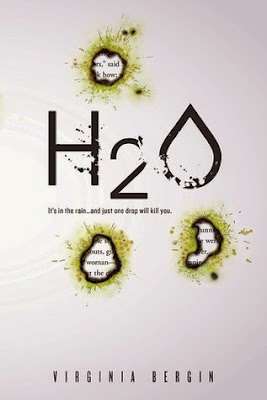 Summary: Fifteen-year-old English girl, Ruby, is at the home of the very cool Caspar, getting her first, breath-shattering kiss from them when his Dad comes barreling out of the house, shouting, and yanks them out of the hot tub. It could be because both of them are in their underwear, and the punch has gin in it, but ... nope, Caspar's parents are known in Ruby's set to be "cool," tolerant, and wealthy. Dragging people out of the hot tub doesn't fit with that, so it must be something else. Turns out, Ruby's right. They were nattering on about the rain... Unfortunately, they didn't say what was the deal with the rain -- and everyone at the party, hung-over and startled, sees its immediate effects. Caspar goes out in it, with just a towel over his head, and moments later is writhing in agony, sores appearing on his skin. Ruby leaps at the chance to go home between showers -- and is promptly locked in the den. Screaming, threatening, frothing - her blind terror at the action of her loathed stepfather borders nearly immediately on hysteria. As incidents spiral out of control, Ruby is left alone in a world which couldn't care less who is cool, what boy she loved, or who her parents were. It's about survival - and the question of whether or not arrogance, good clothes, and the "in" crowd will save you, when it all breaks down.

Peaks: Ruby is ANNOYING. However, Ruby's behavior, in many ways, is normal and natural. Reeling in panic and loss, she goes for the unnecessary. Ruby cakes on makeup, steals clothes she could never previously have afforded, constantly checks her dead cell phone, makes it her first job to head back to find her friends, tries to email, despite knowing without a doubt that the internet is down and won't be up again -- she shows instinctive behavior, instinct that the human animal in distress cannot help but show. The silent idea that "this should work," and "somebody should save me" shows her flailing repeatedly, making little or no attempt to save herself, until forced. Unfortunately, there are tons of people like this, so Ruby comes off as absolutely realistic.

While individual human behavior - with its less savory drift into viciousness - is somewhat understandable, there are a few issues which pulled me out of the story...

Valleys: "People are at their best when things are at their worst," or so the chirpy saying goes. This is definitely NOT THE TRUTH in this novel. Ruby is, within the first week of being alone, turns looter, thief, screamer, and assaults another person. While all of the things she does have reasons behind them, the unwinding of the societal framework of her world seems to go by with blistering speed. 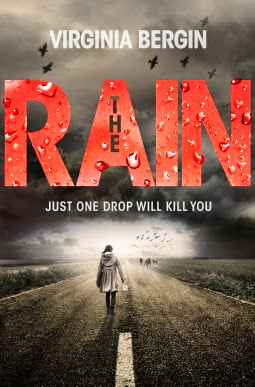 I was critical of Mike Mullins' ASHFALL, which, after the Yellowstone super-volcano eruption, had people engaging in cannibalism within the week. While that would indeed be a terrifying and life-altering circumstance, there's a huge psychological taboo against humans eating each other, except in conditions of last resort, so the timing on that, even though the eaters were mainly escaped prisoners, seemed a little off to me. In H20, while there was no insta-cannibalism, immediately after the initial rain poisons people and causes deaths, there are gunshot deaths - in Britain, where most people don't have guns ready to hand. Granted, it rains often in the UK, and granted, myriad people had gotten caught out in it - and myriad people drank the tap water which was also infected. The initial massively high death toll made sense, but what made no sense to me is that everyone behaved like clueless fifteen-year-olds. The BBC basically told everyone to stay and shelter in place - but nothing else. This, from a news organization which had successfully piloted a country through a nightly bombing blitz, rationing, and near starvation during WWII? This, from a nation who created Land Girls, Victory Gardens and hosts sturdy walkers and campers and tons of self-sufficient farmers? This, from a nation with a close relationship to the U.S., who has protocols set out by the Centers for Disease Control? I found it hard to accept the entire world falling apart. The CDC has put out guides about contaminants which even Cub Scouts know: boil the water, treat it with iodide, chlorine tablets, alcohol... but the author set up the "bacterium from space" as this superbug which no one even thinks to try and kill by the simple expedient of boiling water. Again, I find it plausible that RUBY won't know what to do, but no one knowing what to do - or what to try, even - is suspect. Further problematic is that the only one who knows anything is a spotty, unattractive, nerd - and male, thus leaning comfortably upon a whole familiar cushion of stereotypes.

Finally, that the entire World Wide Web crashes is problematic - servers don't die in the rain. Servers don't need people to do anything with them - so why did they all go down simultaneously? Surely some sites would be up - even relics from the earliest days of the internet, like message boards and listservs. Why the simultaneous loss of cell phones and cell towers? Ruby might not be able to explain the whys to the reader - but surely someone else within the novel would have known, and been able to communicate this, or hint, or -- ? There are several interruptions of logic of this type in the novel, but the howling panic and chaos which erupts almost instantaneously seems to argue for no necessity for understanding -- as long as the author can distract the reader with a panicky response, the logic disruptions remain easier to ignore.

Conclusion: Narrated by a protagonist who seems incapable of saving herself, yet behaves realistically for a spoiled and tiresome fifteen-year-old, some science plot holes, a non-diverse group of character, and an incompletely comprehended disaster make the debut novel for what is apparently a trilogy. Fans of the scary dissolution-of-society-shows-our-true-selves post-apocalyptic novel, who are able to suspend their disbelief and/or need-to-know long enough to get to the sequels, will find this novel a fast-paced and exciting tale to add to their shelves.


I received my copy of this book courtesy of Sourcebooks. You can find H20 by Virginia Bergin at an online e-tailer, or at a real life, independent bookstore near you!

You are much better than I am at isolating WHY a book doesn't work, Tanita. My review is already written but saved until next week.

@ Jen Robinson: I wanted to like this more than I did. When I lived in the UK, the BBC put out weather advisories for hot days, and advised people to ...drink water. The BBC are kind of like the Talking Heads of Step-By-Step Instructions, and they've been doing that for years. I cannot imagine them failing their people now... and so my suspended disbelief fell down there, and kept falling.

Still, I know this book will work really well for some. There's a lot of drama, and very "now" teen stuff.

After reading your review a while back, and just reading this one last week, I ended up liking the book more than I thought I might. My biggest quibble was that there seemed to be no organized disaster response plan--like, say, dragnetting the towns for survivors or having shelters set up right away and putting THAT out on the radio and such. But despite the logistical questions, I was reasonably entertained.

@Sarah: ...and sometimes, "reasonably entertained" is all one can ask for! It wasn't awful, it's just that honestly, the British government is SO parental that the disorganization here just didn't at all seem feasible, and even if they WERE caught off guard, as you say, there should have been a kind of "okay, the worst has happened, THIS is what we're doing now" response.