KidLitCon, 2014: A Retrospective, Part I 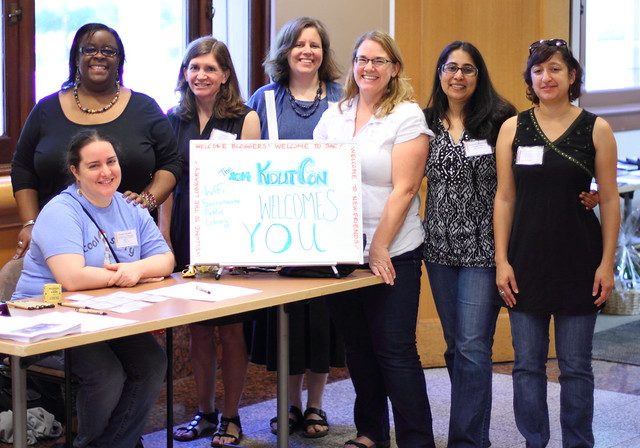 Can't remember the last time I was more excited that an event was finally here, and was so relieved to have it over. I had fun - and I'm so grateful for the co-chairs and the support of a great programming team, but planning a Con can drive you crazy, if you're a bit obsessive and a worrywart. I probably also drove Charlotte, Reshama, Melissa, Jen and Sarah equally mad, but there you have it: it's what I do, and I bow before the KidLitCon 2015 Baltimore team in advance. If you're an obsessive, begin to brainstorm now - it won't save you panic, but you'll at least know you've got everything you CAN control, controlled. (There will be technical difficulties. The room may be inaccessible for forty-five minutes, and the caterer will either screw up a delivery, be detained by security, or both. [No, seriously.] The Skype will fail and the laptop may explode. Plan now to just take a deep breath.)

There was never really anything to panic over, of course. We were a room - or, at times, two rooms - full of brilliant, zany, intense, opinionistas, just listening and thinking together. There was more we could have said, given time -- and I have some few regrets about unfinished conversations, but on the other hand, we now have a lot of fodder for the blog.

Myriad people live-tweeted this Con -- and we hope it was fun for those of you who weren't there to follow along in little bites. I feel like I took a bite the size of my head, and I'm still chewing, thus I'll be blogging about this for the next few... whatevers. I'm sure you don't mind.

One of the best things about observing and listening to the conversations around me was the feeling of watching people find their tribe. Regardless of what specifics we thought of, agreed with or disagreed with about blogging, commenting, critical analysis, or diversity, when people came into the room, the conversations buzzed, and the noise level grew higher and higher as blog names and Twitter handles became flesh-and-blood friends. 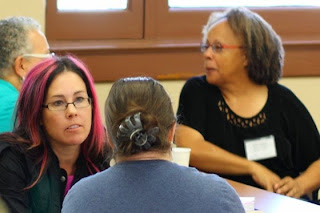 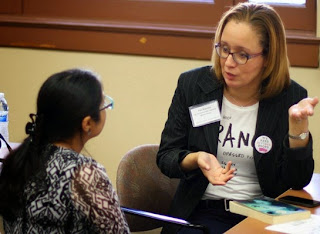 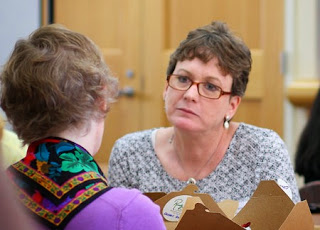 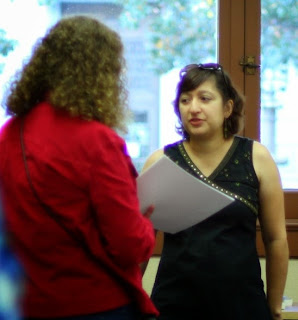 It was funny watching people come in cautiously, sort of edge around the periphery, and then be snagged by someone admiring their shoes (Not gonna lie, that was probably the first conversation Hannah Gómez had with EVERYONE), discussing the book they'd both just taken a copy of, peering at each other's name tags, and just suddenly warming up, opening up, smiling and gravitating toward the another like-minded group of people and a cup of tea. Meal times were even funnier - the minute people COULD talk, the noise level in the room trebled. The topics were wide-ranging, from serious to ridiculous, some of them spurred by Charlotte's fantastic idea of throwing them on a notepad in the entryway. Thoughts on how to write a bad review - or if anyone ever should - how to critically review a book written by someone about a culture not their own, thoughts, oddly, on Slankets, blue hair, the Maine-loathed Kokopelli (probably only That One Guy in Maine, but still), and Pam Margolis' "what's your ethnic ancestry" uncovered some fascinating answers. (I'm probably related to Leila. Just, you know, because. The Acadian-to-Creole French connection. Be afraid, Josh, I am now, like, your OTHER sister-in-law. And I'm MUCH, much more annoying.)

A number of people talked about their kids - and showed pictures - discussed their book-related shirt collections, the state of funding for school libraries, the frustrations of librarianship, and opinions about Roger Sutton and whether or not Horn Book is actually going to give self-publishers a fair shake (or whether self-publishing SHOULD be given a chance, and how they've not really thought about dipping a toe in, because "awful books"). Discussions changed some minds - and didn't others. Everyone was civil anyway. Conversations ranged through topics of racism and diversity, types of diversity, activism, social justice, and the realities of the world we live in vs. the world in the books we see -- and they were fascinating discussions, too. If we'd only had more time, we'd have plotted a way to change the world. 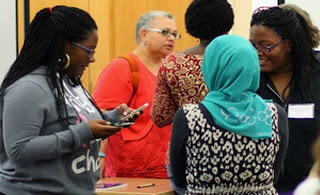 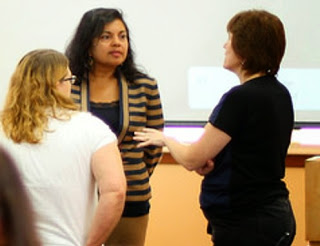 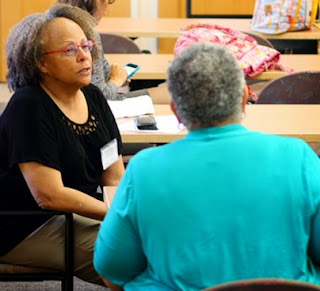 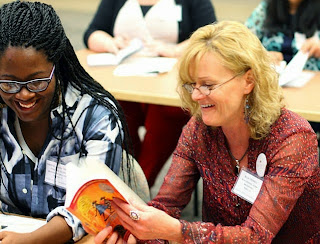 As it is, we simply came away with ideas on how to affect our little corner of it... which might be just enough.

I have a pad of paper on which I jotted down my thoughts and observations from the first day, in between welcoming late comers, explaining to the nice lady from the library who we were and what we were doing, and popping in/out of the other breakout sessions. Some of them are a little random -- others of them are actually things I need to think about:

Yep, those were my musings from THE FIRST day.

I haven't even covered how energetic and powerful Mitali's keynote was (I'd LOVE to get she and Ms. Jewell in a room together - that would be a dynamic talk to be a part of, as writer or reader) or discussed the uses of anger, some thoughts on The Floating Head of Shannon Hale, gushed about the bathtub in the hotel, the authors who showed up, the weather or anything else... and I do have more to say (of course). Until next time - keep reading, thinking, and sharing.

tl;dr: KidLitCon. ~ Here, have some pictures.

Posted by tanita✿davis at 4:40 AM
Labels: Diversity, Ethnicity and YA Literature, Happenings, Kidlitcon, Multicultural Fiction, What We Do, Who We Are

I love A) that I heard your REAL LIVE VOICE while I read this post, B) the look of ABJECT HORROR on Josh's face when you told him to BE VERY AFRAID, and C) the idea that we could actually be related because THAT WOULD JUST MAKE SO MUCH SENSE.

@ Leila: I can't believe how awesome your hair is in real life. This seems random, but it was so much fun to see it all in person - the great hair. The hilarious facial expressions. And the flailing. Also another reason to be related - goofy faces and bizarro gestures that really, few other people understand...

*sniffle* And now, living on opposite coasts is going to be THAT MUCH MORE DIFFICULT.

The opposite coast thing makes me SAD. :(

On the other hand, we have ALA to look forward to. :)

So glad D. took so many good pictures, because I was a total slacker on that front this year. Besides that "shelfie," I only doodled two people...

But I also wanted to agree with you on Nathalie's accent. LOVELY FRENCHWOMAN.

For what it's worth, I think that all Con organizer committees require at least one worrywart. Who knows what preventable problems would have happened without you?

And thanks for the photos! I plan to borrow and share the top one - it is great!

Agreed -so much to think about. And I agree with Leila. So nice to hear this post in your voice as I read.

I'm smiling so hard it hurts. LOVE all the detail here. Almost makes me feel like I was there. ::sniffle:: Really killed me to miss this one.

Need to reread this and savor, and think about some of the questions you've raised.

If you're pondering Twitter, I AM SO THERE FOR YOU, BABY.

Hats off to you and the rest of the coordinating committee because from where I was standing, there wasn't a single glitch. The attendees were well-behaved and friendly, the program ran on schedule, the catering was fantastic, and the banquet felt very luxurious. You all did an amazing job!

Thanks so much for all your hard work and worry. The conference was fantastic. I also wish we could have more time for some of the unfinished conversations, but I guess there's always next year, and online. I suspect (I hope!) these conversations will be ongoing for a long time.

I'm so impressed you guys survived this - as you know Jackie & I nearly DIED during the Seattle con a few years ago. It is exhausting.

I love this post, T - so much here to think about. I wish I could have been there for the diversity discussions esp on personal ethnicity. I have mine (really) tattooed on each of my wrists.

I hate it when anyone describes themselves as "white". WHAT IS THAT?????

Man...I just love you guys so much!

I was very sorry to miss the con this year as well. It's been among the most valuable cons both professionally and personally to me over the years. Thank you for the detailed wrap up and questions raised.

And for Ms. Yingling, give KIZZY ANN STAMPS by Jeri Watts a try. It's about school integration in 1963. It's on the Oregon Battle of the Books list. And it has a black girl and her border collie on the cover. So cute!

@Melissa: I was SO SAD that you weren't here!!!!! SO. SAD. But, I totally am excited about ALA being in Cali - I have hopes I'll see people again next summer!

@Jen & Sarah: Thank you guys for being awesome. And ignoring me quietly melting down.

@Sheila: YES. Like Charlotte said, we don't just have to stop talking about our theme when we're away from the Con. I am still thinking and plan to write more about these questions, and next year, I have a feeling that you and Paula are going to keep the conversation going, too. ☺

@Zetta Elliott: THANK YOU SO MUCH for coming. We were *thrilled* that you wanted to - that you'd come ALL the way West again just for our little group. We are all so hopeful and energized after listening to you guys.

@Colleen: I have a feeling you were muttering, "Never again!!!" after Seattle, but I heard NOTHING but good about it, so I know no one knew you guys were sweating, either. And so it goes, I guess.

@Roseanne Parry: It was so nice to have authors and bloggers and librarians and readers just thinking and intermingling. Would have loved to have met you in person - maybe next time!

Loved being a part of Kidlitcon this year! Fun to meet so many of you finally!