The Cute Girl Network by Greg Means, MK Reed, and Joe Flood. As I mentioned on Twitter when I first finished this one, it was definitely one of the funniest books I read all year. Seriously—when you get the line "OW! MY COCCYX!" within the first three pages, how can you NOT laugh? (Anyway, how can I not laugh?) In the most general sense, this is a story about two goofballs who find each other and fall in cute, hilarious goofball love. Jane's a skater chick who works in a skate shop. Jack's kind of a semi-loser who works at a soup cart. They really like each other. Problem is, his loser-dom is rather legendary, and the more girls Jane talks to, the more they try to warn her away from Jack for her own good. But, of course, one size does not fit all in dating as in clothing, and there's an inevitable (but rewarding) happy ending to be had. I really thought this was both sweet and comic, and all the silly side characters were made even more hilarious by the fact that they are all just a bit believable, as if you could have met them in real life. Also, do not miss the many sidesplitting references to Twilight. Also by MK Reed: Americus, reviewed here.
Review copy source: Publisher | Buy from Indiebound 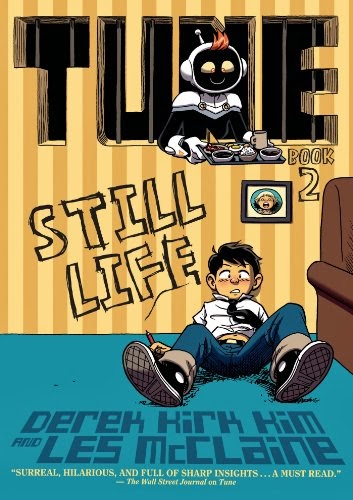 Tune Book 2: Still Life by Derek Kirk Kim and Les McClaine. I reviewed Book 1 of this graphic series just about a year ago, and in that first installment, protagonist Andy Go finds himself taking a too-good-to-be-true job in an alien zoo—perfect for his unmotivated, lazy self, or so he thinks. The first book had a lot to say about parental expectations and early career lack of focus, as well as romantic haplessness; this one takes place in the interdimensional zoo and is a LOT more surreal. But still quite funny, as we see Andy trying to get in the good graces of the aliens and learning to cope with having his entire life on display in cross-section for zoo visitors. Of course, as he learns more about the aliens, he learns more about himself, but he doesn't necessarily put that knowledge to good use…and of course hilarity ensues.
Review copy source: Publisher | Buy from Indiebound 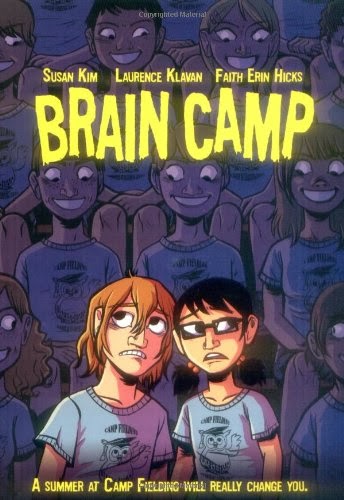 Brain Camp by Susan Kim, Laurence Klavan, and Faith Erin Hicks. This one was a Cybils nominee several years back, during a year when I was on a different panel, so I hadn't read it yet. However, I really enjoyed other graphics by the same authors, so I was excited to get caught up. Brain Camp sort of sounds like it would be about kids who get sent to nerdy summer camp, but really, Camp Fielding is all about turning kids who are in some way losers—Jenna, who can't seem to satisfy her ambitious parents, and Lucas, whose single mother is an alcoholic and who can't stop getting into trouble—into so-called winners. Or something. Our unlikely pair of protagonists are certainly no dummies, so they quickly figure out that there's something weird going on at Camp Fielding. I don't want to give too much away, but of course it's the very fact that Jenna and Lucas are stubborn, curious, creative, and determined that not only drives their parents crazy but also helps them solve the mystery. Also by Susan Kim and Laurence Klavan: City of Spies, reviewed here. Also by Faith Erin Hicks: Nothing Can Possibly Go Wrong, reviewed here, and Friends With Boys, reviewed here.
Review copy source: KidLitCon 2013 | Buy from Indiebound
Posted by Sarah Stevenson at 8:30 AM
Labels: Adventure, AF, Fantasy/Sci-Fi, Graphic Novels, Guy Appeal, Humor, Reviews, Romance