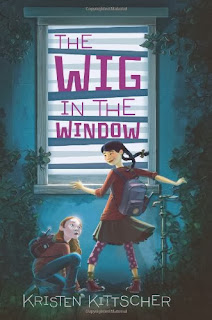 The Wig in the Window by Kristen Kittscher. I don't review middle grade novels all that often, but I'd been wanting to read this one since meeting the author (full disclosure: we have the same agent). Great things about this book: it's completely silly and funny and chock-full of comical misunderstandings and what I'd describe as just plain kid humor, and yet it also has a serious side, and the characters learn from their misunderstandings and misbehavior. Also, I love that one of the main sleuthing characters is Asian-American, and I LOVE-love the overarching theme that appearances can be deceiving, and sometimes you can find friendship where you least expect it. The noir-ish, wise-beyond-her-years narration style of Sophie occasionally tripped me up, but it also often cracked me up. The plot involves spy-game-crazy Sophie and Grace, best friends, who catch their weirdo middle-school counselor Dr. Agford in what appears to be flagrante delicto, so to speak—mid-criminal act, or so it appears, and, as you might guess, they jump to the absolute MOST incriminating conclusion. What is Dr. Agford's secret? And what happens when play-spying turns into something all-too-real? Hilarity ensues, but so does trouble.
Review copy source: KidLitCon 2013 | Buy from Indiebound 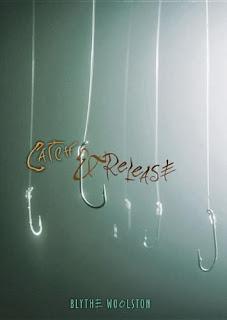 Catch & Release by Blythe Woolston. One of the things I liked most about this author's previous novel The Freak Observer (reviewed here) was the fact that the characters were flawed, yet realistically so, making what could be an oversimplified problem novel into a complex exploration of what it means to recover and heal. The same applies to this book. We meet narrator Polly Furnas in the wake of a life-changing, terrifyingly believable incident: infection with MRSA. MRSA being Methicillin-resistant Staphylococcus aureus, one of our most frightening drug-resistant superbugs. People died. Polly survived, but with a scarred face. Odd Estes lost a leg. Now she and Odd—who never had much to do with each other before—are together in a car, on a fishing trip that turns into an extended cross-country road trip. They're both damaged; Odd is, quite possibly, slightly unhinged; and neither of them knows what life is going to mean now that they both bear physical and emotional scars. It's hard to know what to say about this book, because it's very subtle and very character-driven. Their story is really a journey in every way, tangibly and intangibly. But don't assume that means there isn't any action or suspense, because there is. It's just…a sense of lateral motion. Go read it and you'll know what I mean.
Review copy source: KidLitCon 2013 | Buy from Indiebound 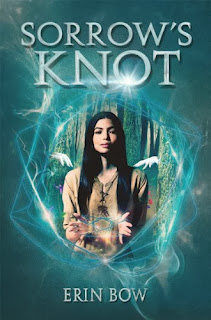 Sorrow's Knot by Erin Bow. I enjoyed this author's earlier novel Plain Kate (reviewed here), which was a Cybils finalist in Sci-Fi/Fantasy in the 2010 contest. Like the earlier book, one of the strengths of this one was the fact that the author weaves a new-yet-recognizable mythology out of recognizable elements and places. And weaving is a good metaphor to use, here—main character Otter was born to be a binder for her tribe, using string figures to bless, defend and protect against the hungry dead. The dead are always creeping in on their settlement at the ends of the earth: the tiny slips, the hungrier shadows, and the most horrifying of all, the White Hands, revenants whose mere touch means becoming one of them. And then one day, one of the dead—just a tiny one—almost takes her friend Cricket from her. From that point on, things start to change. As Otter and her friends Cricket and Kestrel come of age, they realize that not everything is as easy or as predetermined as they were led to believe, and it may be up to the three of them to forge a new path, for their own survival and that of their people. It's a unique story, and I can't say too much about it without giving things away, but I will say that I couldn't put it down, and had a few late-night reading marathons as a result.
Review copy source: KidLitCon 2013 | Buy from Indiebound
Posted by Sarah Stevenson at 6:26 PM
Labels: Adventure, AF, Humor, Magical Realism, Middle Grade, Multicultural Fiction, Mystery, Problem Novels, Realistic Fiction, Reviews