Still somewhat looking forward to the DreamWorks film based on this series, it was good to reserve the second book in The Grisha trilogy, though I must admit that when I got it from the library, I sat and looked at it for a few days.

I had no qualms about reading a middle novel in the series, no, that wasn't it. The story is compelling, but this series is a hard, hard, hard one for me to read. The characters are very real to me, and the conflicts and ambiguities of power and position - and a war-torn country - are tough to think through. Most of the time, when I read a book, I read from the position - exalted, smug - of an outsider. I know what's best for the main character. I know what I'd do to make things right, heal the breach, get the girl/boy, save the nation.

This time, I don't. Granted, a couple of times in the story I found myself grinding my teeth and groaning, "For goodness sakes, just tell him the truth!" But, more often than not, I was clueless. It seems like Alina Starkov - still such an awesome name! - and her people, despite her victories? Seem doomed. And I have no idea of any distance from that, and I actually read - with trepidation and gosh-what-will-happen-next!? dread.

Reader Gut Reaction: The tagline of the book is, "Darkness never dies," and seriously? That's creepy. And, unfortunately, true. When I read the first book in this series, I was intrigued by the Mysterious Orphan of the tale. She was pale and plain and useless, she felt, and suffering from unrequited love. In time, things reversed, and at the end of the novel, she actually has a choice put before her - who to be, where to go. In this novel, we find that all choices... have consequences.

One of the most implausible plot developments I ever run across is the Love Triangle. I mean, really? EVERYONE in Forks wants to love you and squeeze you, and take you to prom? No. Real life hardly ever goes that way, and the number of times it does in fiction just underscores the fictionesque nature of books. But, in this series, it's not really a love triangle that's happening. It's a battle for power. It's about using people - or being used. And it happens, in this political realm, over and over and over again...

Concerning Character:Alina is a pitiable shadow of her former self, in book two of this series. She's ... back to being paper plain and useless. Mal is wonderful, Mal is strong, Mal is making a way for them to live. Alina is ...bitter. What does Mal see in her? Everyone on earth is better looking, nicer, more positive - and maybe more worthy of him. Alina just holds him back, and, in a way, holds herself back. And, when the Darkling finds them again, even as she's terrified and hurt -- and sickened and scared -- it's almost ...well, it's almost what Alina... wants. At least, as part of his train, she can do something - even if it's nothing but cower and hope. At least, she's somebody valuable again, in a twisted way. 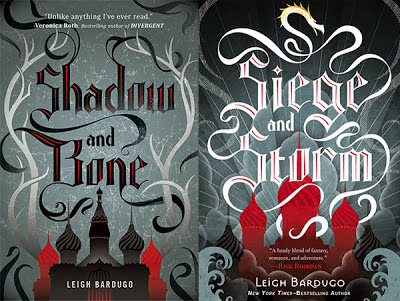 And, yes, that sounds just as ugly as it is: Alina has gotten used to being somebody. And, as much as she fights it, she longs to have more purpose than being the one fought over, courted, and chased to the ends of the earth. The crazy priest - Apparat - with his weird, mildewy smell and his nutsoid ideas, has infected the countryside with the cult of the Sun Summoner. He's making Alina a saint... but aren't saints always martyred? Not even Mal seems to be able to see Alina as she is - as someone he loves and wants to be near. He seems, by turns, afraid and disturbed by her dreams. Only the Darkling seems to understand her, like he always said he would. He's everywhere, it seems. And now, it seems that there's no escape...

The poor, orphaned Alina has always wanted somewhere to belong - with Mal at her side. What if that's never going to be possible? What, then?

Warning: This novel has the gorgeous Slavic feel, contains mysterious orphans, hot trackers, bewildering princes, pirates, sea creatures, and dicey pilgrims with disturbing tastes in finger bones. Betrayals, backstabbing, and grievous harm and near kisses are daily norms. Do not read while operating heavy machinery, or before clearing your afternoon schedule. Produces instant longing for the next book, which does not come out until the 12th of never. In stereo where available, no purchase necessary, does NOT stand alone - you'd be lost instantly if you tried to start with this book. Read the first one first. I think this is an amazing sequel, your mileage may vary.

Until next time we Turn the Pages, cheers!


I snagged my copy at the library. You can find SIEGE AND STORM, Book 2 in the Grisha Trilogy by Leigh Bardugo online, or at an independent bookstore near you!

Posted by tanita✿davis at 3:48 AM
Labels: A Cybilism?, Fantasy/Sci-Fi, Reviews, TSD Review

Shadow and Bone was okay, but not enough to entice me to read the second book. You're right. The love triangle is more about power, but I think this made the characters distant and less lovable. That said, I did wonder how the second book turned out.