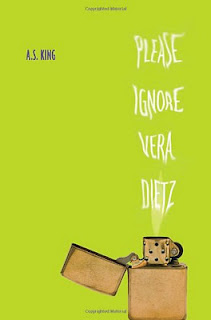 Reader Gut Reaction: This one was gripping as well as heartbreaking. What do you do when your best friend is in trouble? What if he's your EX-best friend? Alternating between past and present, eventually the two strands of the story come together in a way that's both shocking and satisfying. This one had me thinking about the story long after I was done; had me wondering what I'd do if someone close to me was in a terrifying situation and I had to make a tough choice about whether to try to help or take the seemingly simpler route of putting my head in the sand.

Concerning Character: Vera Dietz is a relatable character with multiple issues to deal with—not only her betrayal by Charlie, but also the absence of her mother and the fact that she's trying to live down an embarrassing secret about her family. She WANTS to be ignored. Especially after what happened to Charlie. But the side characters are well developed, too—most notably Charlie, shown to us in flashbacks, who suffers from even more horrifying and emotionally damaging issues; and Vera's father, who has struggles of his own. All of the main figures in this book are hurting in some way or another. Those who are able to reach out to others when they can't cope alone, the ones who stop ignoring their own pain and their own damaged selves, are the ones who can finally move forward and grow. But if you ignore the warning signs, it might take a shocking wake-up call to provide enough impetus to make a real change.

Recommended for Fans Of...: Stories about coping with changing relationships and overcoming the baggage of the past, like Melina Marchetta's The Piper's Son (reviewed here) and The Freak Observer by Blythe Woolston (reviewed here).

Themes & Things: Growth as a human being, of course, is one of the overarching themes of the book. A part of that growth is learning to deal with one's conscience, one's regrets, and coming to terms with what you know you should do even when it seems impossibly hard. This is also a book about what happens when abuse is allowed to become a pattern and take its toll unchecked. The idea of closure is also an important one in the story—when less tangible wounds go unhealed, that too takes its toll.

Cover Chatter: I think this one has a really awesome cover. Just sayin'.

You can find Please Ignore Vera Dietz at an independent bookstore near you!
Posted by Sarah Stevenson at 8:00 AM
Labels: AF, Magical Realism, Problem Novels, Realistic Fiction, Reviews

One of my favorite reads from last year-plus a couple of teens I passed it on to really like it too. Really wanting to read Everyone Sees the Ants.

Thanks for your review!

Thanks, Deb! I want to read Everyone Sees the Ants, too--her books are all so quirky and intriguing.

This one sounds a bit gut-wrenching - just what I like in my YA. Thanks for the recommendation. I'll add it to the queue.

Found your blog as part of the SCBWI comment challenge. Glad I did!

I missed this one last year, but you really make me want to read it! Thanks.

I seem to be a bit behind on my reading no matter how hard I try! I'd forgotten about this one, and then rediscovered it when I went down to the library and found it prominently displayed in the YA section.

Great review. You were able to articulate some of the things I loved about the book but couldn't quite put into words.