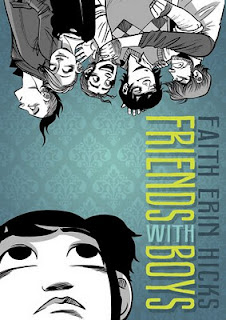 Liked 2011 Cybils nominee Anya's Ghost (reviewed here)? Then I highly recommend checking out First Second's new title Friends With Boys. It's also a story about fitting in at school and in your own family, and, hey—it's also got a ghost! Friends With Boys will be available at the end of next month, and I was thrilled to get to read an advance copy and give it a little buzz. I'm happy to see First Second and other GN publishers stepping in to fill the niche that I'd hoped DC's short-lived Minx imprint would fulfill: graphic novels that appeal to teen girls but aren't "girly."

Reader Gut Reaction: With a quick, engaging storytelling style that's well-suited to a manga-influenced page format, Faith Erin Hicks has created a story that highlights classic themes like fitting in at a new school, making friends, appreciating your family for who they are, and learning that you don't have to struggle through life alone. The great balance of laugh-out-loud humor and relatable high-school angst, along with a fun cast of characters and just a touch of mystery and hijinks, made this one hard to put down.

Concerning Character: The main character, Maggie, lives in a house full of boys—three older brothers and her dad—but things are about to get even crazier. After being homeschooled for years, she's about to start (GASP) high school. She doesn't know anyone at school or have much contact with people besides her brothers, but despite being nervous, she meets friendly, endearingly goofy punky chick Lucy and her brother Alistair, and they quickly become friends. But they've got a few secrets, especially Alistair—and, of course, there are plenty of pre-existing tensions and social dramas that Maggie has no inkling of, having been homeschooled until now. Even her brothers have their own issues. But so does Maggie...and that's where the ghost comes in.

Quiet and thoughtful, I found Maggie an easy character to relate to, even though my experience with homeschooling is pretty limited. After all, we've all (mostly) faced the first day of high school, and whether you're new or not, it's nervewracking even if you're excited. She's also a really good-hearted person--she tries her best to be open and friendly, and she doesn't judge people by appearance alone.

Themes & Things: The more general theme of fitting in at the beginning of high school is nicely underscored by Maggie's more unusual story of starting public school after being homeschooled by her mother for all of her school career prior. I like the fact that this is a story homeschooled kids will relate to, as well as kids with a more traditional school experience. Family, too, forms a big part of this story—coping with the loss of a family member and the complex and ever-changing sibling relationships that occur when you're a girl with three older brothers. Friendships—looking beyond appearances to the person inside—always a good theme. Also, forgiveness comes up again and again, in big ways as well as little ones; sometimes people act like doofuses and you have to learn when it's better to forgive and let go than to hold a grudge.

Authorial Asides: Friends With Boys was released as a webcomic, too, and you can read parts of it online there.

You can pre-order Friends With Boys at an independent bookstore near you!
Posted by Sarah Stevenson at 8:00 AM
Labels: AF, Graphic Novels, Realistic Fiction, Reviews, Sibling Fiction

Am reading this on the installment plan - really loving it, and loving the artwork.

This sounds extremely similar to her first comic-an exercise on drawing that's online called Demonology 101.
Starting school after years of being homeschooled-check. Making friends with a bad girl and a slightly bland boy-check.
That's it but it's quite a bit, I think.

I'd say that maybe this offering is more rounded - the girl isn't "bad," at all, just pierced and punky. As for the boy being slightly bland - I prefer to call him reformed. ;)

It's funny how writers often find themselves repeating themes. I look forward to what else Faith Erin Hicks has on tap.