I happily spent some time at the library today retrieving one of my holds that came in--Need by Carrie Jones--as well as a few other goodies for my holiday enjoyment: Lock and Key by Sarah Dessen, Does My Head Look Big in This? by Randa Abdel-Fattah, The Secret History of Moscow by Ekaterina Sedia, and The City & The City by China Miéville. But in order to merit a book binge, I feel like I ought to at least provide briefs of the last library haul. So here goes.

Gilda Joyce: The Dead Drop by Jennifer Allison is the latest installment in the Gilda Joyce psychic detective series. By now, Gilda's nearly fifteen, and she's about to start a summer internship at the International Spy Museum in Washington, D.C. Of course, no Gilda Joyce book would be complete without a mystery, and this time, it's some ghostly museum visitations. I've enjoyed seeing Gilda mature over the course of the series while still retaining her quirky charm, and Allison spins a fun mystery with an appealing supporting cast. 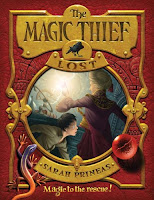 Lost: The Magic Thief Vol. 2 by Sarah Prineas is just as exciting and un-put-down-able as the first volume. I was completely absorbed by the continuing story of budding wizard Conn, apprentice to the wizard Nevery--as a character, he's cerebral and internally focused, stubborn, yet endearing; an unusual combination. However, these characteristics serve him well as he embarks on a quest to save the disappearing magic of the city of Wellmet, regardless of the consequences. I really, really love this series and I adore its narrator.

The Miles Between is by Mary E. Pearson, author of The Adoration of Jenna Fox, which is a fabulous futuristic read. This one takes place in the present, but it, too, has elements of what I'd call magical realism. Destiny Faraday's moved from boarding school to boarding school ever since she was seven years old and hasn't been home since. Now, going on ten years later, she's on a strangely fortuitous road trip with a few of her classmates and for the first time she finds herself opening up, confiding her feelings of abandonment and allowing herself to feel the unfamiliar support of friendship. This is a story with twists and surprises, and much-needed catharsis.

Frances Hardinge, I think, is one of my favorite authors, and The Lost Conspiracy--her latest novel--just confirmed that suspicion. All I can say is, it's such an incredible book that the moment I finished it, I wanted to pick it back up and read it again right away. That almost never happens. Mysterious, distant Arilou is one of the Lost of Gullstruck Island--meaning she has the ability to send her senses out into the world, away from her body. Her caretaker is her younger sister, Hathin. Both are members of the Lace, a tribe reviled by the island's ruling class, who colonized it generations before. This is such an impressively, staggeringly complex and layered novel, from the nuances of how the island's peoples interact, to the traditions and legends of each group, to the indomitable spirit of Hathin, the primary narrator of the story, and how she changes and comes into her own over the course of the novel. For fantasy fans, this is a must-read, in my opinion.

The Evolution of Calpurnia Tate by Jacqueline Kelly is a charming historical novel about plucky "Callie Vee," an eleven-year-old girl who, in 1899, doesn't quite fit in with her family or society. Only her grandfather truly appreciates and nurtures her love of science, while her family seems to just want to turn her into a pie-baking, lace-tatting future housewife. The wealth of historical (and scientific) detail really make Callie's world come alive. One caveat, though: you must never tell my dad about the author. As I was reading the jacket bio, it said that she is a practicing physician AND lawyer. Without a doubt, this would only prompt my dad to exclaim "See?? You could have been a doctor AND a lawyer AND still been a bestselling writer!" To which I say fie.

I just finished reading Tantalize today, a novel by the blog goddess Cynthia Leitich Smith. If you like vampires and werewolves, you'll enjoy this book, but even if you're not a huge fan of that genre, this is still a gripping murder mystery with elements of dark fantasy that complement rather than compete with the story. It takes place in a sort of alternate present in which vampires and werewolves are known to society; it reminded me a little of Robin McKinley's Sunshine in that respect. Narrator Quincie Morris is absorbed with the opening of her family's restaurant, the vampire-themed Sanguini's, when they suddenly find themselves in need of a new head chef. While the police investigate the violent death, Quincie's dealing with finding a new chef, putting up with her uncle's increasingly weird behavior and icky wanna-be vampire girlfriend, and trying to hide her feelings for her half-werewolf best friend, Kieren. This is a fast-paced and suspenseful read with a lot of fun gory AND culinary details (if you like that sort of thing!).

I loved the Sedia - can't wait for your thoughts on that one!

Every time I read Finding Wonderland, I want to read more books. You two are like pushers.

You know, my father will periodically say to me, in all seriousness, "What you have to do is write a bestseller. It can't be that hard." Glad he has confidence in me, but yeesh.

AF: I cannot WAIT to see what you think of Does My Head Look Big In This? Can't wait.

Adrienne: WHAT? Jenn gets "literacy evangelist" and we get PUSHERS!???

Is it the shifty-eyed looks we give? The black hoodies??

I think the real problem is that I am just weak when it comes to books. I want to read them all.

Darn it. I knew it was the light sabers. That, and our Mos Eisley cantina sweatshirts. Total pusher value there.

I am a serious SFF addict; I feel your withdrawal pain.

This is the second great review I've read on The Miles Between now it has to be added to the pile!

Tammy: I was impressed again in this one with Mary Pearson's ability to create an atmosphere in which it feels like anything could happen!

I can live with being a book pusher. God knows I'm doing a half-assed job as a "reviewer" these days, anyway. :)

The Lost Conspiracy is actually the first Frances Hardinge I truly liked....(I never understood why Fly by Night was so loved). But this one is everything you say it is. My only worry is that it is being marketed as middle grade, but it's the sort of book that is adult, even, in the complexity of the story.