One collaboration, one first chapter; one written by Asian-Americans, one written in Korea. The latest YA offerings from First Second are as different as can be--thematically, as well--but as always they are of admirable quality, broad appeal, and further push the boundaries of the graphic novel form, making it worthy of the title graphic literature. 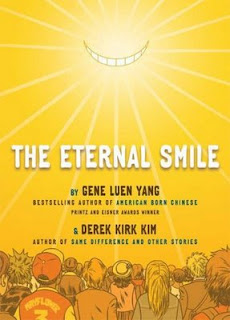 The first one I read—one which I was looking forward to ever since reading American Born Chinese--was
>The Eternal Smile, by Gene Luen Yang and Derek Kirk Kim (Good As Lily). These two award-winning authors collaborated on the three stories contained within, stories that contrast and complement one another, while still all addressing a similar theme—the sometimes insubstantial and permeable boundary between the worlds of fantasy and reality, and what that means to us as the players, actors, dreamers within. I was honestly floored by all three.

"Duncan's Kingdom" is a twist on the fantasy hero's story—what if fantasy became reality in a cruel twist of fate?--as well as a tale of finding inner strength and redemption. "Gran'pa Greenbax and the Eternal Smile" is, on the surface, a fun and sarcastically critical take-off on old Disney comics that many of us will remember reading as kids; but that story is layered within a more sinister one about the creators of those types of stories. "Urgent Request" is the tale of Janet, a beleaguered office worker who manages to spin a spam e-mail from a Nigerian prince into a life-changing fantasy. All three stories are winners, with the art style and writing style seamlessly meshing and supporting the stories themselves—DO NOT miss it. 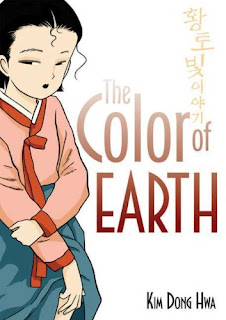 I was also looking forward to
The Color of Earth, because it would be my first major foray into manhwa, or Korean manga. This first chapter in the trilogy by Kim Dong Hwa could be classified (in Japanese) as shojo, since the coming-of-age tale of a young Korean woman may appeal most to female readers. (And this is fabulous—I applaud any and all efforts to increase the amount of graphic literature with appeal for young women, especially now that Minx is defunct.) My understanding from the foreword is that this tale is based on the life of the author's mother, a sort of tribute to her growing-up years in a rural Korean village. The artwork reflects this, illustrating with sensitivity and vividness, remaining simple and expressive throughout, yet unafraid to add flourishes and whole spreads rendered in exquisite detail when called for by the storytelling.

The story opens with Ehwa as a very young girl, living with her widowed mother the tavern-keeper. As she grows older and into young womanhood over the course of the book, we see her gradually gain insight and understanding into not only her own growth and maturity, but also into her mother's life as a single female tavern-keeper, subject to all sorts of racy gossip while also leading a relatively lonely existence. At the same time that we get a window into traditional Korean culture of the somewhat recent past, it's the universal elements of the story that will make it really resonate with Western readers—curiosity about one's own growing body, the opposite sex, and the lives of the surrounding adults; loneliness and companionship and love.
Posted by Sarah Stevenson at 9:00 AM
Labels: AF, Graphic Novels, Magical Realism, Multicultural Fiction, Realistic Fiction, Reviews

I really can't even tell you how jealous I am that you've read The Eternal Smile. No, really. I just cannot express it.

I'll save these for you if you want...I might have to start a second book bag... :D

What Tanita said. Jeal-OUS! I heard Gene Luen Yang speak at the National Book Festival and I walked away just wanting to BE him for a day. All that talent.