How do I love Shrinking Violet Promotions? Let me but count the ways... You know, it IS true that most people who write are not the people who are having trouble tearing themselves away from the party to sit down and type. As Kurt Vonnegut is quoted as saying, "Out on the edge you see all kinds of things you can't see from the center." Writers seem to hover a bit at the edge, in view of the action, but not usually right in the middle... Many of us are introverts, and being an introvert in this society really is seen as... some kind of social disease. Yet the Violets assure me that I can "promote [my] work with success" so I'm hoping that what they've said is true! Stay tuned as I try and delve into their secrets to surviving the spotlight! Also, stay tuned for wise words from Robin Brande, who is now schmoozing with the televisionistas. (Is there nothing this Kidlitosphere Conference organizing, backpacking, dog-walking, novel-writing dynamo cannot do?)

Via the ever-interesting Anastasia: who do you know who can review your YA book? Know of a high school newspaper?? Ypulse is the land of great ideas today!

From Bottom Shelf Books -- a small donation of time will raise a dollar per person for literacy with Jumpstart's Read for the Record campaign. Today, just... read Ferdinand the Bull. Sign up and say you will or have. And that's ...it. Maybe you won't be joined by 'hundreds of thousands,' but you can be an army of one... go here to record your read. 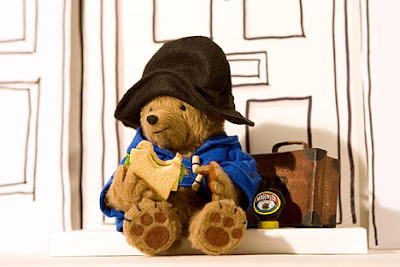 which they are as well) about the portrayal of the kidlit favorite, Paddington Bear on UK TV. Previously as stuck on marmalade as Pooh Bear is stuck on 'hunny,' Paddington Bear is now taking in the dreaded yeasty spread, Marmite. Many people have very strong feelings about media using literary characters for the sake of advertising. I must admit that though the commercial is quite funny, I'd be a bit annoyed if Winnie the Pooh was pimping chunky peanut butter or something... on the other hand, this happens all the time in the U.S., doesn't it? I mean, is there anything Shrek or Aladdin or other Disneyfied characters haven't been on? I mean, couldn't you imagine (with disgust) Harriet the Spy pimping for KFC? Does it make more of a difference to the national disgust level if it's a character from a book?

National Book Award finalist Patricia McCormick is chatting with the readergirlz -- tonight! Last call to be there!

Man alive. 'Tis the season, apparently: once school starts, it's open season on books. I don't know how the teachers and librarians in these towns can take it - we're sending you courage, people! Hang in there...
Posted by tanita✿davis at 6:31 AM
Labels: Views, World o' Blogs

I'm very disturbed by the Paddington Bear thing. When we went to the UK when I was four, my parents got me a yellow Paddington Bear tote bag (which said, of course, "Please look after this bear. Thank you"), which had a tiny little zippered pouch attached, and hidden inside the tiny pouch was a tiny inch-high fuzzy bear. I LOVED that tote bag.

This is just wrong. As much as I dislike commercialization in general, it would be one thing if Paddingon Pear were shilling for a particular brand of marmalade. If Marmite wants a character to tout its product, the company can make up its own character. Hortense the Hedgehog can have her own set of adventures where her use of Marmite saves the day.