'O' is for Obviously Otherworldly: October in the Kidlitosphere

Well, the kidlitosphere hoi polloi have posted their Conference schedule. Those of us sulking at home expect a full report next weekend, people, including all the juicy bits. All right? All RIGHT!?

It's OCTOBER! So, so, SO much happens this month! (Okay: technically, I'm a day 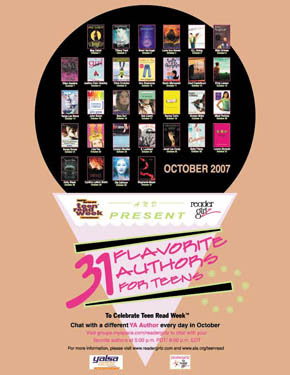 early. But I'm in the UK. And A LOT HAPPENS, okay? I had to start a day early!!) First, you MUST CHECK OUT the scoop on 31 Flavors -- the readergirlz have done themselves quite proud on this one. The readergirlz will host NIGHTLY bookshats from 5 PM PST/8 PM EST (exception on Halloween, when it's at midnight or 9 PM PST/12 AM EST -- with Stephanie Meyers of vampiric fame... Lovely, YA books - and not a day of books, not a week of books, a month -- and a LONG month at that. The readergirlz rock the stratosphere. Thirty-one flavors of awesome, ladies!

The Cybils nominations start TOMORROW!!!!! Please note the fabulous new addition of a Cybils link on the side of our blog (and if it's still on that picture of Kelly from Big A little a, ignore the serious expression. She smiles. Lots. We've seen her.). Wonderland will become busy-busy as A.F. serves with graphics and both of us delve into Sci-Fi and Fantasy books. If you're not involved this year as a panel nominator or a judge, don't forget that there's a place for you at regardless -- we'd have no books to read and discuss if YOU didn't nominate them. So, get out there and do your thing! One fantabulous book nominated per category, per person, and thank you for playing.

There is nothing like a month to name a mood. Autumn eases us into a thoughtful place with crisp mornings and woodsmoke-scented afternoons. Here in the UK, the light is dying, and now all of the university classes which begin at 11 a.m. are beginning to make sense, as the noise of the city begins later and later in the day. Keep your eyes open for October Country, this month's kidlitosphere salute to all things dessicated and leathery, waning and ebbing, autumnal, dying, and dead. This is what autumn gives us: the 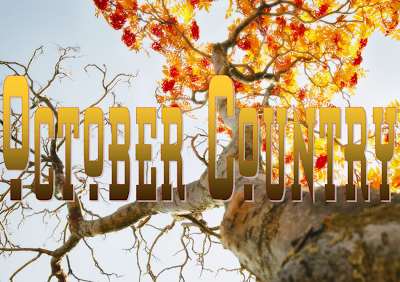 opposite side of the coin that is the natural living world; a slowly, colorfully dying one. What books or stories put you in mind of October?

Last year I did a huge thing for Banned Books week. I won't spend as much time highlighting it this year, but I wanted to be sure and point out a couple of reasons why people who talk about banning should keep talking, and not let censorship fade from their attention. First of all, because because narrow minded people still exist. Secondly because sometimes -- sometimes, right wins. Drop by ASIF this week to see what other goodies are in store.

Each year, the Jimmy Fund of the Dana-Farber Cancer Institute has a fundraiser to raise awareness and cash to cure cancer. This year, the kidlitosphere will be honoring the life of Robert Mercer and participating in Robert's Snow, an auction of children's book illustrator decorated snowflakes, by showing the artwork up for 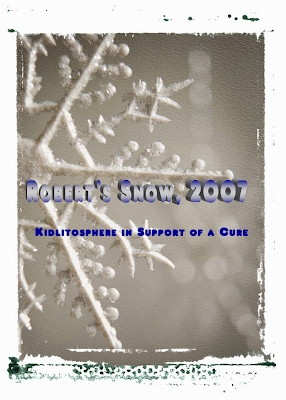 auction at our site. We'll be talking a little about the artists, discussing their techniques, and how they got involved. Wonderland may not really do much with picture books, but we love them, and we have an Actual Illustrator Type on staff. This will be good, we promise!

At squeetus blog, Shannon Hale is interviewing Megan Whalen Turner, author of some fabulous books. I was amused to hear that she doesn't introduce herself to the neighbors as a writer. Indeed, when on says 'writer for children and young adults,' people do tend to back away slowly... An interesting first part to a three part interview. Check it out.

Wicked Cool Overlooked Books comin' at ya tomorrow. Have a lovely last Sunday in September, roll on October!
Posted by tanita✿davis at 5:29 AM
Labels: Random Notes and Errata, Views

What amuses me when I tell people I write for young adults, is when they ask me to tell them about what I'm working on, so I do, and then they say something like "wow, it sounds really good, but yeah, I'll probably never read it." Because it's "not for grown-ups," apparently.