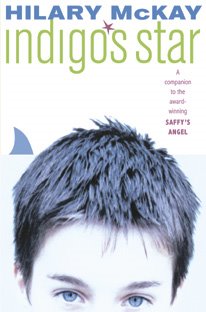 "Indigo awoke with a strange feeling of doom hanging over him. It was a minute or two before he realized what it was. Monday."

There are some UK authors who have just the right touch in writing middle grade novels. The kids aren't too old, they manage to have fun where no one has to get hurt, and they're still young enough and not too cool to love their weird and slightly annoying families. There is a charming eccentricity, an endearing skewed-ness that causes you to want to read more. Indigo's Star is a novel like that. It's sweet and memorable but not screamingly "hilarious" as the book jacket promises. It's better than that. It's a good book and thus doesn't need all of the hype.

It's a book where nothing really happens.
Well, nothing except for ...life.

The Cassons are an artsy family with unusual names - Indigo, Cadmium, Permanent Rose, and Saffron. Their slightly mad parents, Eve and Bill, are loving but ever so distracted. Thirteen-year-old Indigo has missed an entire semester of school, since he's had mono, and his mother is just now realizing that he's been better for quite awhile. But Indigo has been home long enough to realize that he's enjoyed being home. It's peaceful, for one thing. There are no head-flushings in the toilet by the bullies in his class, and it's been nice having his little sister come and talk to him, and nice to simply lie in bed and count the ceiling cracks. But those sorts of interludes never last. Indigo gets up, and the bullies start in again, only this time things are different. He's taller and thinner, yes, and Saffron has gotten wind of his beatings and is wading in to help out, but there's also a new boy in school named Tom. He's an American, and it's harder to bully him. He actually manages to hurt himself more than that bullies can. Indigo wonders what's wrong with him. Tom wonders what's wrong with Indigo.

The tale of Tom and Indigo's friendship is interwoven with the issues in the Casson family. The Casson parents are separated, only they don't announce it, not really. Mom is at home, but she sleeps a lot, and only barely keeps things together, painting awful pictures of spaniels on pastel clouds that sell and keep the family afloat, even though Dad says they're "not really Art, are they?" Caddy is nineteen, and she pops in between beaus and college courses to see about keeping the family pulled together while Dad's in London in his art studio, creating Art, and attending gallery functions and jetting off to Paris. Saffron, their adopted sister and her best friend Sarah, both fourteen, are still keen to be sure that nothing bad happens to Indigo. Between the lot of them, the family keeps afloat, but Rose still worries that they'll all sink. Troubled by her father's absence, she creates crisis after crisis in a series of funny but poignant letters in repeated bids for him to come home. In the end, it is his love for her, not his fear that the family is falling apart without him, that brings him back. He is who he is, the family realizes, and without him, they won't drown.

This book is the companion volume to Saffy's Angel, Permanent Rose, and Caddy Ever After, to be released this summer. Author Hilary McKay has struck gold with the Casson family, as she has been connected twice with Whitbread Children's Book of the Year Awards - one in 2002 for Saffy's Angel, and a shortlisting in 2005 for Permanent Rose. Kudos aside, these novels are tender and generous, stuffed with characters and minor crises; the Cassons are honest and loyal and fiercely loving (and sometimes just fierce) and make you want to join the family yourself.
Posted by tanita✿davis at 1:59 PM
Labels: Reviews