One of Rosemary Clement-Moore's strengths as a writer is her sense of fun, her good grip on cultural references - even obscure ones - and some crazy-complicated plot twists. It goes without saying that her characterization is splendid - mostly what we've loved about her books in the past is the inner mind of some complicated character who goes whistling into the dark and creepy world, and comes out only a little worse for wear at the other end. This is a fast-paced book with a lot of detail - museums, historical characters, and the like. You'll want to pop over to Minnesota yourself.

Reader Gut Reaction:You'd never know that this novel is a sequel - it has a lot of standalone value, as the individuality of each Goodnight girl is, as always, very, very strong, and leaves you hoping to meet the whole lot of them at some point. You do meet a new one this time 'round - from the 1920's. I can imagine a Clement- Moore book set in the twenties... it would be awesome! Anyway. I sat and read this in a single sitting, and can well and truly call this a beach read. Or a poolside read. Or a bedside read. Lots of action, mysterious mystery, and the requisite Hot Guy. I didn't love this one as much as TEXAS GOTHIC, but lots of fun regardless.

Interesting sidenote: the main character is a first year college student. This doesn't change the fact that the book is perfectly appropriate for both younger and older YA. In the still undefined marketing niche of "new adult" this novel still stands firmly in an E for Everyone kind of place - which is quite a feat, given that there's an intense romantic connection, and a lot of worrying happenings in the dead-and-departed world. Somehow, Clement-Moore does it again: both new adults and older ones will appreciate this book.

Concerning Character: We met Daisy Goodnight in TEXAS GOTHIC, where she comes across as a pain in the butt know-it-all. Despite being stunningly good looking, she's abrupt and a bit cold. Not surprisingly, in this novel, she's not that person, because we're in HER head. And, so, she's smart - brilliant in science and maths, but also slightly cracked, because she's got a lot going on in her head, mainly that she's trying to promote the idea of Daisy Goodnight, Hardcore Witchy Woman, and really, she's just nervous and unsure of herself, and determined to do right - as best she can.

Her most recent case takes her from her home of Texas to Minnesota - underdressed for the whole thing - to find the whereabouts of a college student after the death of her bodyguard/driver. Daisy - who hears the dead - has been secretly working with the FBI for quite some time now, as their person-of-last-resort, but in this cellphone and Facebook mad world, she's no longer a secret. Even in Minnesota, Daisy is such a Not Secret that the student's mafia crime boss father decides to kidnap her... because it's his daughter missing, and he'd like Daisy's undivided attention - the FBI aren't working fast enough for him. The thing is, Daisy would have been glad to help, if he'd just asked - but now he's got a geas laid on her, and she's trapped. And, there's a Hot Guy in the mix - who she can't seem to remember isn't entirely on her side; after all, he was there to kidnap her. Meanwhile, her usual sharp skills don't seem like they're quite... working. The kidnappers aren't your average run-of-the-mill, looking for a ransom folk. They've got some connection to a shadowy Brotherhood... and something else hinkey is going on... 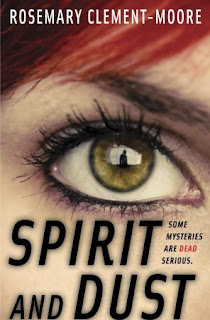 Cover Chatter: I always love a good, unique cover, and this eye cover is definitely unique. However, the little silhouette in the eye, though - is it the love interest, Carson? Is it representative of the disturbed dead? I can't quite tell... but it seems like a "real" person, an actual embodiment, which means it'd be Carson, which is ...okay, kind of a disappointment. The Goodnight Girls are enough in and of themselves to be interesting characters, without applying the usual marketing schtick of having the Female Form YA Cover to catch a reader's eye. This is certainly a memorable cover, but I'm still not convinced that the design folk quite understand how to communicate the quirky joys of this series in cover form.


I picked this up at my local library. You can find SPIRIT AND DUST by Rosemary Clement-Moore online, or at an independent bookstore near you!

Posted by tanita✿davis at 11:13 AM
Labels: A Cybilism?, Fantasy/Sci-Fi, Reviews

I bought it for my Kindle yesterday! Now I just have to finish my library books first...