Buckle Your Swash: Under Radar Reccomendations 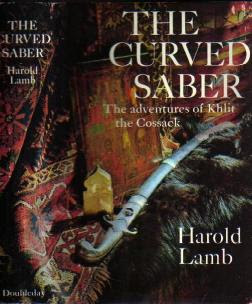 There was a type of fiction written largely in the forties and fifties -- in the heyday of speculative fiction -- that showed the genre of Adventure Narrative to its fullest and finest advantage. Those were the books you could describe as 'thrilling,' with flinty, taciturn heroes (and virtually invisible heroines), vivid action sequences, bold adventurers, treasure to be had, lives to be saved, battles to be fought, and schemers to outwit. Those edge-of-your-seat stories were often serialized in magazines such as Adventure or Amazing Stories, and were dismissed by many as mere pulp fiction, but in amongst pages of more forgettable fare landed The Curved Saber: The Adventures of Khlit the Cossack, the work of a quiet man named Harold Lamb.

Mr. Lamb was born in 1892 with speech and hearing disabilities which crippled him socially as well. He lived fully, for a time, in his imagination only, delving into the library at Columbia University and reading deeply into a hitherto completely unknown world - the world of Asia. He started writing short stories in college, and wrote for Adventure magazine for twenty years, eventually becoming known as "an American Dumas." His character, Khlit, was first chronicled in those pages, and the response of readers is what secured his place in the pantheon of Cool Character history.

Later in his career Harold Lamb stepped away from academia and became a screenwriter. His writing was part of Samson and Delilah, directed in 1949 by Cecil B. DeMille, and many of his other stories were turned into film, including The Crusades, 1935, The Plainsmen, 1936, The Golden Horde (which was allegedly about the life of Genghis Khan) 1951, and The Buccaneer, 1938. Mr. Lamb even wrote a history book specifically for young adults, with watered down violence and sort of Robinhood-like Mongolian swordsmen, but it was not nearly as popular with young readers as his serial stories. The voice, descriptions and tight pacing in those books contributed to creating a world away that enthralled young adults yearning to ride out boldly toward swashbuckling adventure, and Khlit the Cossack was the Harold Lamb character readers wanted to ride with the most. 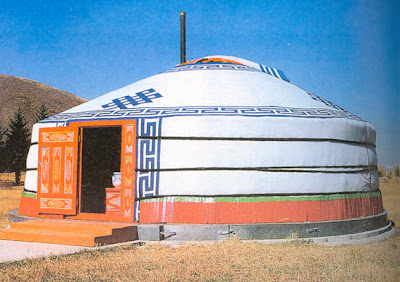 Cossack. Just saying the word with its sharp-heeled 'k,'for some conjures up jackboots and bloodthirsty pillaging, red-cloaked Tsarist soldiers and the Napoleonic Wars; for others the word brings to mind entertainment -- those people doing that dance where you squat and cross your arms and kick and shout "ho!" a lot, and wear a furry hat, and maybe have a curved sword at your side...

Part of the reason for the confusion is that the Cossacks were a hugely nomadic tribal group, and they were all over Russia, and Central Asia. Their paths cross Russian history, Mongolia's ancient past, the history of the Ukraine, Chinese history, and more.

Harold Lamb's exploration of the Cossacks takes place on the vast grasslands of the Central Plains, when the old warriors still ruled the steppes. His character Khlit the Cossack was probably the most famous and fabulous depiction of a hard-as-steel, justice-loving, sword fighter. Khlit's mythic status was probably the basis for such depictions of nomadic sword fighters as Conan the Barbarian and Red Sonja, but they are only the most single-dimensional, anemic and paltry of imitations. Khlit was larger-than-life and simply amazing.

Lamb's work introduced the various ethnicities present in that region at that time in a way that was so vivid and interesting that young would-be adventurers were mesmerized. They suddenly saw detail in what had been a piece of history. The people of Genghis Khan weren't just crazed killers. The Cossacks weren't just Russian or Chinese faces in a blur. Unlike other heroes of adventure fiction, Khlit wasn't a womanizer - though he had female friends, and regularly helped damsels in distress. Khlit was simply... better than the usual fare.

The nomadic tribes had no written language. Because of this, their history is largely 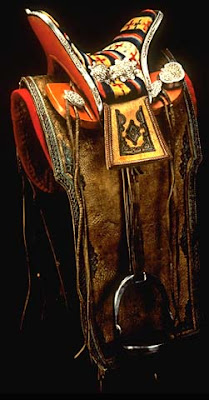 told by their oppressors, and all we have of them is their descendants, and the critical words of those who studied them from the sidelines. Lamb takes the history of the steppes -- which to us would be a miserable experience - and humanizes it, giving it faces and reasons and subtleties of meaning. WE would hate to sleep in the saddle, and might not enjoy a night in a ger or a yurt. WE might be be grossed out to eat raw horsemeat, warmed and tenderized by the sweat of our horses, from beneath our saddles -- as our hero does. But when he does it, it's just another day on the steppes.

Lamb's intense historical focus came off more like cultural anthropology than sociology. His fiction examined the world of the Cossacks from within the Cossak's sphere, as opposed to looking at it from a strictly scholarly way -- and making an overall judgment from pieces. That kind of fiction writing takes a massive amount of research, a lot of care for one's subjects, and boatloads of talent. Harold Lamb was three for three.

Until recently, Lamb's work was totally out of print, impossible to find, kept in the stacks at libraries, and generally inaccessible. Young people who had grown up in the fifties and sixties loving stories of swordplay and treachery and treasure-hunting with a band of sinewy comrades kept passing the tales along to their sons, and thus Lamb's work has never been thoroughly forgotten. The resurgence of interest has prompted Bison Books at the University of Nebraska Press to offer his Cossack stories again, bound in volume form. Now the fortresses of hidden assassins, the search for the tomb of Genghis Khan (and the subsequent escape from his vengeful ghost), the rides of the Mongol horde and other fantastic adventures are available to everyone. If you enjoy historical fiction, being transported to places in your imagination, and aren't afraid of a little blood and gore, jump in. You'll be glad you did. They're books we think you'd love, 'cause we do.

There is, elsewhere, more of the usual awesomeness of the kidlitosphere. Fans of the under-read should also, check out:

Chasing Ray writing on Dorothy of Oz from Illusive Arts Entertainment (the Dorothy comic she says we should all be reading!),

At Not Your Mother's Bookclub: An interview with Robert Sharenow, author of My Mother the Cheerleader,

At lectitans, you'll read about The Angel of the Opera: Sherlock Meets the Phantom of the Opera by Sam Siciliano,

Bookshelves of Doom is all about The God Beneath the Sea, Black Jack & Jack Holburn all by Leon Garfield,

Writing and Ruminating has an interview with Tony Mitton and a review of his book, Plum ,

The YA YA YAs spread the love on I Rode a Horse of Milk White Jade by Diane Lee Wilson (And I can attest: awesome book, folks.),

A late inclusion from Semicolon on unbeatable picture books.

And Chicken Spaghetti wraps up Monday with The Illustrator's Notebook by Mohieddin Ellabad.

Posted by tanita✿davis at 12:01 AM
Labels: Reviews, Under Radar Reading Recommendations

This sounds awesome! These were the type of movies we used to watch on Sunday mornings - so cool.

You did a fabulous job with this post; I'm sure Mr. Lamb would be honored.

You had me at "Robinhood-like Mongolian swordsmen." (Which, considering my radar books, shouldn't come as a surprise.)

Off to see if my library system has any of his books...

What a great post! Not a book I would ever have found on my own, but since I keep discovering that the books and authors you love are the ones I love,too....well, gotta go find me some horsemeat! (yuck and yuck, BTW)

Oh, Colleen, yay! I am glad someone else loved those Sunday movies! I try and find pieces of them I remember on DVD - they've just vanished! I remember one called No Man's Land about a *woman* who was the sheriff - and another about a group of women in the 1800's who were some kind of spies and saved President Roosevelt or someone. I was maybe ten at the time I watched those, and LOVED THEM... and never found them again...

I very much honor Mr. Lamb, and I do hope he would be pleased. He inspired me. I am not particularly a girly girl, but I'm quite ...um, lazy. But this book, and the sequels -- made me want to ride out across a prairie or something.

Wow, excellent entry! The story of the author is just about as fascinating as the premise of the books...

If they were very very good, and promised to treat them well, we might be persuaded to lend somebody our copies of The Curved Saber, Nur Mahal, or Ghenkis Khan. They're all originals, tracked down via Powells.com over the course of several years.

That's fascinating, TadMack. Thanks for pointing out that series.

This sounds great! I'm definitely going to check them out